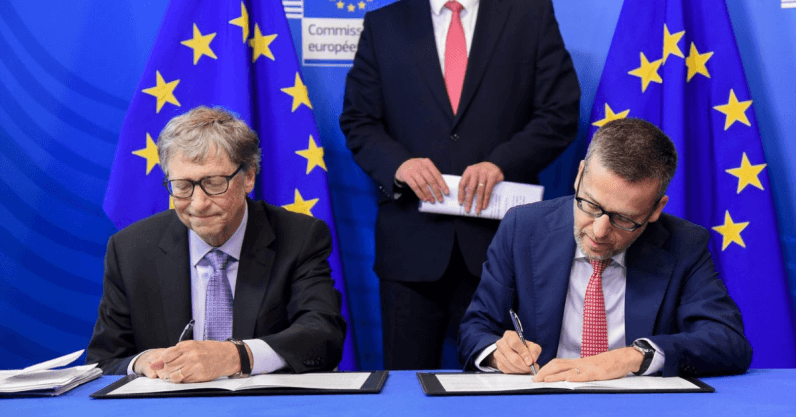 Bill Gates and the EU announced that the union and Breakthrough Energy — an investor group led by Gates — will together launch a €100 million clean energy investment fund to combat climate change in 2019.

Gates is currently in Brussels working on the pilot project on behalf of the investor group, which counts other world renown billionaires such as Jeff Bezos, Michael Bloomberg, Jack Ma, and Richard Branson.

Gates met with Carlos Moedas — EU‘s Commissioner for Research, Science and Innovation — to sign a momentous agreement which will create “a joint investment fund to help innovative European companies develop and bring radically new clean energy technologies to the market.”

During the signing Gates spoke about the importance of technology in the battle against climate change and commended the EU‘s leadership in the field, especially when it comes to investments in research and development.

“The scientists and entrepreneurs who are developing innovations to address climate change need capital to build companies that can deliver those innovations to the global market. Breakthrough Energy Europe is designed to provide that capital,” said Gates.

I’m in Brussels this week to sign an agreement between Breakthrough Energy and the @EU_Commission. We’re creating a pilot fund that will invest €100 million in European companies working to stop climate change. https://t.co/3PrAa4Wsky

According to Gates‘ recent blog, the billionaire coalition at Breakthrough Energy aims to put more than $1 billion into helping promising companies that are combating climate change to “take great ideas from the lab to market at scale.” That means that their €50 million investment (the other half is funded through EU‘s Horizon 2020) is only the beginning of their philanthropic fight.

This is of course only a tiny fraction of their combined wealth and they could be criticized for not doing more, since many of their companies are big polluters. However, having big names join in climate change initiatives (even though they only pay half) creates the necessary buzz to make people think about this insanely important issue (at least it got you to read this article).

However, if they really want to make a difference they better hurry to spend the rest of the $1 billion as it’s clear that we only have 12 years to limit climate change catastrophe. You can do your part by making changes in your lifestyle, vote for environment-minded politicians and policies, or invest any millions you might have lying around. We’re all in this together and the clock is ticking.