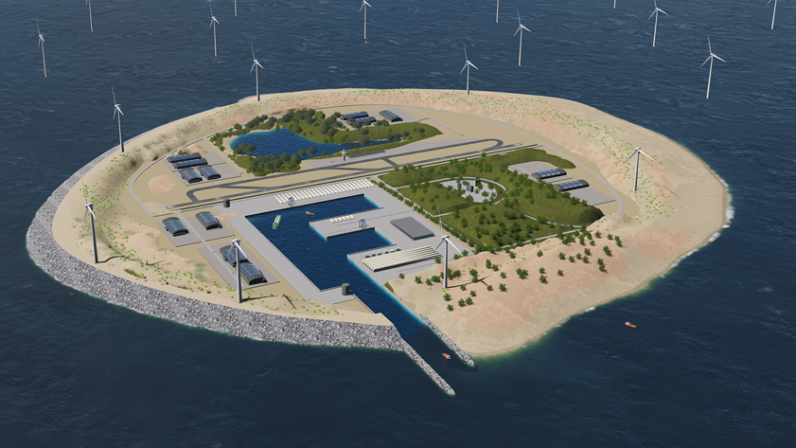 Wind turbines are a great way to go green. Too bad people feel that they’re so gosh darn loud. So, if nobody wants turbines in their backyards, what can densely populated countries do to produce cleaner energy? Why not just build a massive artificial island surrounded by wind turbines out in the sea?

On March 23, Denmark’s Energinet and the German and Dutch arm of TenneT will sign an agreement to explore ways to build a giant artificial island in the middle of the North Sea. The aim of the state-run energy companies is to create a new renewable European electricity system that could provide 70,000-100,000 MW to the Netherlands, Denmark, Germany, UK, Norway and Belgium.

In an interview with Jydske Vestkysten, the CTO of Energinet, Torben Glar Nielsen, said that when looking at the big picture, it is obvious that Europe needs to find new methods to increase its renewable energy output, and that the new artificial island might just be the answer:

We haven’t gotten carried away by our imagination, although it may sound crazy and science fiction-like.

The island will be able to service up to 7,000 wind turbines that will be built around it, providing green energy for 80 million Europeans. The island will therefore act as a power link between the six countries, not only transmitting the energy made from the North Sea turbines, but creating a connection that will enable the countries to trade electricity.

The island will be quite impressive once built. It will cover six square kilometers and will be outfitted with its own landing strip and harbor. Usually offshore windfarms are difficult to maintain but the island will make it considerably easier.

Staff, components and assembly workshops can be stored on the island, which will make it more economical to harness the favorable wind conditions at Dogger Bank, a large sandbank midway between Denmark and the UK.

Although the energy providers’ calculations indicate that building the wind turbines on Dogger Bank in the North Sea will be cheaper, better and easier than building on land, it will still take staggering amounts of money to make it happen.

The undertaking will be massive and building the foundations of the artificial island will cost around 1.35 billion euros (1.45 billion dollars), according to first estimates. However, that is only for the first phase and does not include the cost of building the turbines, harbor, landing strip, grid connections to European countries and the island’s entire infrastructure.

The new island will be an important part of the EU’s plan to fulfill the 2050 goals of the Paris agreement. It will probably make the Earth more habitable for future generations, but more importantly, we’ll get an awesome science fiction-like energy island in Europe!

Read next: Someone turned 'Breaking Bad' into a two-hour movie and put it on Vimeo (updated)