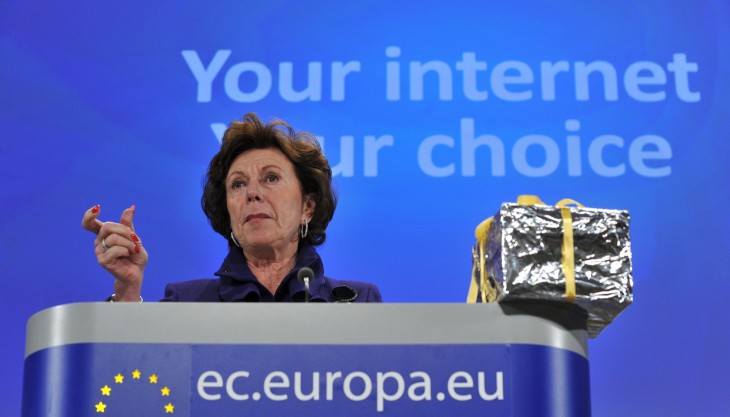 As announced this morning by VP Neelie Kroes in a press conference in Brussels, the European Commission has adopted seven new priorities for the original ‘Digital Agenda for Europe’, which aims to stimulate the digital economy across all European member states and address many of its societal challenges through technology.

The Commission posits that the digital economy is growing at seven times the rate of the rest of the economy, but is held back by a “patchy pan-European policy framework” – hence the need for an update.

It says today’s new priorities, sort of a digital to-do list for for 2013-2014, follow an exhaustive policy review and place new emphasis on the ‘most transformative elements of the original 2010 Digital Agenda for Europe’.

The EU Commission argues that full implementation of this updated Digital Agenda would increase European gross domestic product (GDP) by 5 percent or 1,500 euros per person, over the next eight years.

Still according to the Commission, up to one million digital jobs risk going unfilled by 2015 if not for pan-European interventions, while 1.2 million jobs could be created through infrastructure construction.

This would rise to 3.8 million new jobs throughout the economy in the long term, the Commission adds in a statement.

In addition, the Commission will propose an EU cyber-security strategy and directive, and present an industrial strategy for micro- and nano-electronics in order to increase Europe’s attractiveness for investment in the design and production thereof.

In particular, Europe needs a ‘wake-up call’ on high-speed broadband, the European Commission asserts, considering it the very basis for the digital economy.

The Commission acknowledges that the coverage and penetration rates of high-speed networks in Europe are increasing, but trail Asia and the United States overall and are at risk of failing to meet the 2020 targets.

Actions on that front include:

The Commission will present a comprehensive package to tackle market incentives to invest, provide targeted funding and reduce roll-out costs.

The Commission is also working on freeing up more spectrums to implement the commitment in the Radio Spectrum Policy programme and will propose an Action plan on wireless communications in 2013.

High-speed broadband will enable the provisioning of essential digital services and technologies such as cloud computing, e-health, ‘smart cities’ and various audiovisual services, the Commission adds.

What about the original Digital Agenda?

The European Commission says the Digital Agenda has met many of its original targets and is “on track to meet many others”.

Regular internet usage is rising steadily, especially among disadvantaged groups, it says, while the number of citizens who have never used the Internet is decreasing, it points out.

Meanwhile, research shows that online buying continues to increase, although the Commission acknowledges that the pace of growth in cross-border e-commerce is too slow.

The Commission also highlights its open data strategy, which should help free up new streams of data from public repositories for third-party apps, and the updated EU roaming rules.

Here’s the full Digital Agenda ‘Scoreboard’ as it stands today: