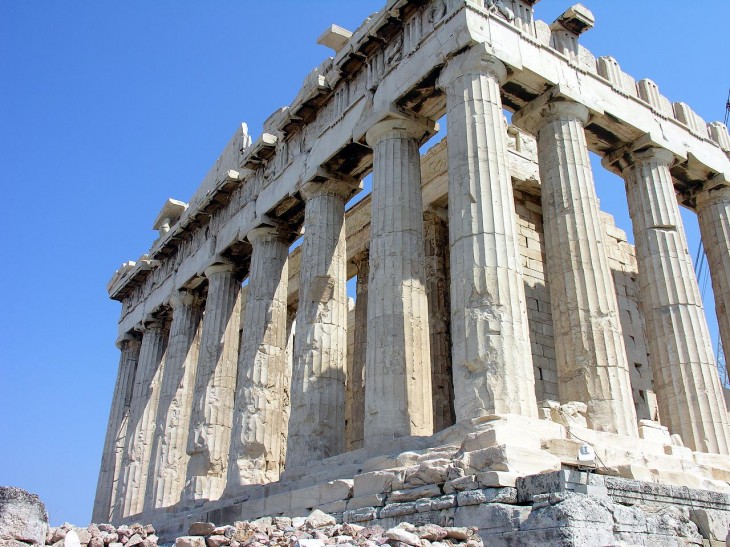 If you follow the news about Greece you must be in shock about its current situation. Billions in debt, one of the highest unemployment rates, and companies closing or moving one after the other. It certainly doesn’t look like there is any future for this country.

I was born and raised in Greece and worked through the system until almost 7 years ago when I decided to move to the UK to further my studies and experience. I won’t start telling you how beautiful the country is or that it was the birthplace of many sciences. What I’m trying to find out is if there is any hope for my home country and if people are doing something when their government and systems have failed them.

Growing up and after finishing an education in Greece, up to very recently, people had two options. Either get a job in one of the civil services or in a large company. In a country that has thousands of small businesses and mom and pop shops, entrepreneurship had declined to a status of non-existence. If someone mentioned that they were going to look away from the “security” of a comfy cushion at a large organisation in order to start their own business they would have been laughed at and told to get serious.

With the economic crisis something very important happened. What Greeks thought of as security ceased to exist. Government services were asked to cut budgets with an axe and companies started laying people off by the thousands. With any form of security lost, Greeks were faced with a live or die situation.

Being a very withstanding and innovative nation, my gut was telling me that something was going to happen and that Greeks would be able to find their way out of this mess. They have survived political, economical and natural hardships in the past and there is no way that they are going to give up. A couple of years ago things started to change.

The return of entrepreneurialism

I started reading in the press about young co-founders starting companies and getting funding. People started welcoming technology into their lives and an entire ecosystem started forming. I’ve been away from Greece for almost 7 years now and in order to get my facts straight I had to speak to the experts. When I posed the question I was stormed with responses and introductions, allowing me to get a much better picture of the current startup environment.

A person that shares my view on the choices Greeks used to have is Dimitris Athanasiadis, as he told me: “The economic crisis has urged people to think outside the dipole work for the civil service or work as an employee in a multinational and instead has revealed the third option of starting up.”

Dimitris is the co-founder of OpenCoffee Greece (a community where founders meet up to exchange ideas and help each other) and has helped startups through mentoring and funding. He believes one of the great problems that startups face is bureaucracy, compliance and incorporation issues. He is, however, optimistic and believes that startups don’t have to look outside of Greece to start up.

Speaking of starting up I wasn’t that surprised to find out that most founders I spoke to had incorporated their companies abroad and were now looking to create a local entity.

The founder of Workable, Nikos Moraitakis, told me why he chose to incorporate in the UK. His problem was neither the bureaucracy nor compliance issues, “Integration with global online payments is much easier to do with a UK entity and a UK bank, compared to Greece.”

I’ve experienced the Greek banking system and it definitely lags behind the one in the UK. Others, like Georgios Gatos from Incrediblue, a marketplace connecting boat owners and crew with travellers, chose to incorporate outside of Greece in order to persuade even the most sceptical users.

This is completely understandable: with all the bad press the country is receiving, most people might think that their deposits could be lost and left without any assurance for their bookings. On the other hand others have decided to keep it local. Dimitris Tsirikos of Jupitee, a mobile app builder for SMEs, said “setting up the company in Greece was not as hard as one could imagine and the maintenance costs are still less than having a company abroad.”

Regardless of the country of incorporation, an issue that was consistently mentioned by startups was the access to funding. Although some funds have started to appear on the map, the country is certainly lagging behind. Yiannis Varelas and Katerina Stroponiati founded Weendy, an app for real-time social updates for extreme sports, around a year ago but couldn’t get access to the funding and support they needed.

Committed to carrying on with their passion, they packed their bags and headed off to San Francisco where they joined the StartupMonthly accelerator and have already secured their follow-up round. Another issue that they pointed out was that of not having enough Greek founder success stories for people to look up to.

I was able to speak to one of the most successful founders in Greece, Jon Vlachoyiannis. Jon co-founded BugSense out of a holiday home and has helped grow it to a cash-positive business that serves 12,000 customers including big names like VMWare, HBO and Samsung. He has also faced problems with access to funding and instead of complaining he decided to do something about it.

The result of the aforementioned effort is ZeroFund. As Jon put it, “ZeroFund helps European startups build their minimum viable product in less than a month by providing a crowd resourcing platform and zero (yep, that is 0) funding – at least at the beginning.”

Once the startups go through the ZeroFund process they will be shortlisted to join the MindTheBridge accelerator in SF, receive up to $65k in seed funding and at least one will enter the accelerator on the spot. His approach is to help others that are facing the same problems they faced in the very early concept stage and help them grow their startup very quickly to the point that they can enter the accelerator.

Although funding is still an issue, the usual problem of lack of talent seems to be non-existent in Greece. As Nikos from Workable told me, the crisis has helped them get better access to talent. Georgios from Incrediblue had the same experience when it came to attracting both talent and partners. With the eagerness and talent to start new companies, a problem that a lot of startups faced is the decreasing spending income and business budgets.

For Megaventory, a mini ERP Software-as-a-Service solution aimed at small and medium businesses, this has actually turned into a positive effect. SMEs are continuously looking for more cost-effective and efficient solutions and their solution fits exactly that requirement. Another startup that faced this issue is Taxibeat. When Nikos Drandakis founded Taxibeat, a smartphone application that enables users to locate nearby taxis, the economy was declining and it helped a rather close-minded occupation (Greek taxi drivers) embrace new technology, improve their service and add a new source of income. He sees Taxibeat as “a child of the crisis, and a paradigm on how we as a society can overcome our own failures and invent a new future”.

Speaking of failures of our society, one of the most interesting conversations I had was with Alexandros Pagidas and Stefania Xydia of Politeia 2.0. Faced with all the political and economic issues, their team started creating a new platform for democracy. The project recently won the Audience Prize for Social Innovation by the European Investment Bank and the team is gearing up for a 2013 launch. Their vision is to build a hybrid (offline and online) social platform that will put the power back in the hands of the citizens. Their plan is to start the movement in Greece and make Athens the center for Democracy and Innovation in Philosophy and Political Sciences.

After speaking with all these aspiring founders I was left with a very positive note about my birthplace. Greek geeks have taken it onto themselves to reinvent the country’s image and take it out of the pit that certain people worked so hard to put it in. I’ll be keeping an eye (and I think you should too) on the Greek startup ecosystem because I think it will start surprising us in a very positive way. What do you think — will Greek startups take Greece out of the crisis or is this just a phase that will fade out?