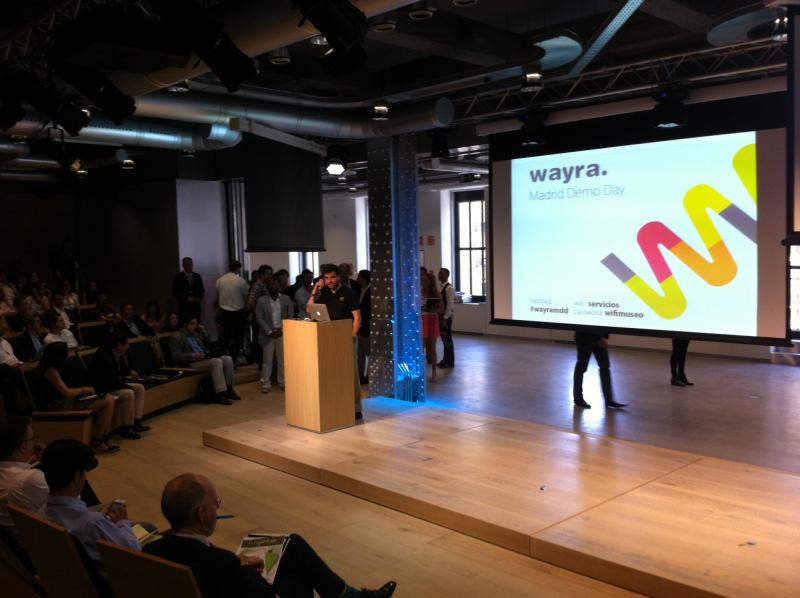 Today was the Wayra Madrid Demo Day – an opportunity for its first startup class to pitch their projects in front of a selected audience of entrepreneurs and mentors, and the culmination of the acceleration process they have been going through for the last few months.

As you may remember, Wayra is the name of the accelerators that Spanish telecommunications giant Telefónica has opened all around the world since 2011. While it all started in Latin America, the one-year old Wayra now also has operations across Europe, including in Telefónica’s home country. In Madrid, which was its first European base, its modern academy occupies one full floor of Telefónica’s historic building, with views over the famous Gran Via.

According to its global director Gonzalo Martin-Villa, “Wayra is much more than an accelerator – it is a global entrepreneurship network.” This was a hint at one of the program’s main selling point for startups, the chance it gives them to collaborate with similar teams in other countries and learn from their experience.

For Telefónica, today’s event was also the opportunity to showcase the value it has added to Wayra’s shortlisted teams. In exchange for an average equity stake of 10%, “entrepreneurs worked with a list of mentors which feature some of the biggest names in the Spanish entrepreneurship space,” said the head of Wayra Spain, Gary Stewart.

As a matter of fact, each startup was introduced by one or two of their mentors, which included seasoned entrepreneurs and investors such as Bernhard Niesner, who founded the language startup Busuu, and François Derbaix, who recently sold his company Toprural to HomeAway for a reported amount of €14 million.

Mentors aside, most of the room was filled with investors – not only from Spain, but also from other countries such as the UK and Israel, which led the event to be fully conducted in English. While it is always hard to gauge feedback in real time, the audience seemed quite enthusiastic about most of the projects, and it will be interesting to see how many investments will take place as a result of this demo day.

From our perspective, one of the most interesting points was to see how much progress the teams had made over a short period of time. We had first reported on them last February, and while those which then were our main bets did very well today, others also managed to considerably improve their business proposal, sometimes thanks to a pivot.

We’ll publish individual articles about the most interesting startups over the next few days, so stay tuned for additional coverage!