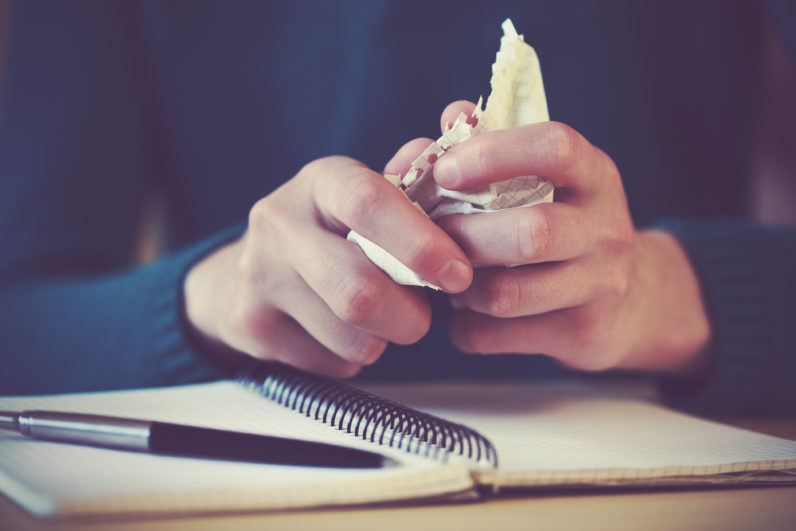 In the app universe, where Apple and Android users have over three million apps to choose from and attention spans are shrinking to all time lows, the answer’s simple: Everything.

While a weak name won’t necessarily spell disaster for a well-conceived product, a great name makes the all-important first impression.

Here are seven common mistakes to avoid when deciding on a name for your app.

With millions of apps on the market and thousands more being added to stores daily, there’s a lot of opportunity to fall on deaf… thumbs?

Chances are if your app is great at what it does people will download it. However, with a dizzying amount of options to choose from, early adoption is much harder to achieve with a forgettable name.

In general, strong app names blend function and flair. And though there are no hard and fast rules, business and utility apps often lean towards the functional, whereas games and social apps have more creative leeway.

Short is sweet and simplicity commands attention. One to three syllable names are generally best and easy to remember. Names that extend beyond 11 characters on mobile operating systems may truncate into an unfortunate ellipsis.

Testing the character count will ensure a professional presentation when your app makes its debut. And, if your name can’t convey it all, let a well-developed tagline finish the job. Think Evernote, whose tagline “Remember Everything” expanded along with the product to “Your Life’s Work.”

Have a couple words or a phrase in mind that perfectly describes your app but your heart’s set on a one word moniker? Don’t fret — smash them together! Some of the most popular apps out there owe their names to a well-executed wordsmash.

Never capitalize all letters in an app name (or any name). Instead, use camel case (medial caps) or sentence case. Camel case is a good option if two joined words could lead to a mispronunciation — in example, PieDish without the intercapped letter might be pronounced as ‘Pied-Dish’.

Tip: Though once popular, avoid camel case (e.g. FaceBook, SnapChat, etc.) unless it is needed for to avoid pronunciation errors.

4. Not knowing your audience

Knowing your audience inside and out is critical for any entrepreneur, and app developers are no exception. Surely you’ve put yourself in the shoes of your potential customers to identify a problem they face and solve it through your app.

Do the same when choosing a name!

Leverage search terms and create a descriptive name that helps users recognize and associate with your product. Knowing what people are searching for and carefully choosing adjectives to create a name with relevance can help evoke an experience and sell your product.

Tip: Do your research. Use sites like SensorTower to see what your audience is searching for and what keywords popular apps in your category are using.

A common misconception is that being memorable means choosing a name that’s similar to another popular app. While slight variations may increase your chances of acceptance, it’s better to start a trend, not follow one. Simply put, the best names are original.

Avoid being zany for zany sake, but using metaphors and evocative words can result in some of the best names. While Shazam doesn’t immediately make you think of a “music identification service,” the name creates an abracadabra-like ability. Also remember that metaphors can lead to some very creative and original names! Think Tinder, Squid, and Periscope.

5. Not consulting a trademark specialist

When naming your app, you must also consider trademark issues. Each app store has its own internal rules and processes for granting the use of a name in its own particular ecosystem.

This does not, however, address the issue of whether or not this name would violate or infringe upon someone else’s trademark rights beyond the app store.

This is why it is imperative to do an appropriately thorough trademark search on any name of interest. As a first stop, you can use the Trademark Electronic Search System (TESS). But even better — hire a trademark screening specialist. If you do infringe on another trademark, you may be asked to change your name or be removed from the store.

Tip: Many elements of an app can function as a trademark.

6. Not optimizing for both the iTunes connect name and bundle name

This is an often overlooked and misunderstood topic. There are actually two very important places to consider when choosing a name for your app.

The first place is the app name field in iTunes connect. This is the name that will show up for customers on the App Store. While there is a 255 character limit for your name here (think of it as a name + mini-descriptor), only 25 of those characters show up in search.

For this reason, make sure your most descriptive words are within the first 25 characters.

The second place to consider is the bundle display name. This is the name that will appear under the app on your iPhone or iPad’s display. While some very popular apps are more than 11 characters in length, in general, try and keep your name 11 characters or below. If you go over, you risk the name being cut-off by ellipsis.

Tip: Many well-known apps don’t include a mini-descriptor. But don’t get hung-up on having a stand-alone name. Using a mini-descriptor with carefully selected key words can improve the chances of your app being found in the store.

Ultimately, the best names are easy to spell (search) and pronounce (spread by word-of-mouth).

If your app name does not inherently imply its function, then it should be creative enough to override the need for association.

Read next: Your hospital receptionist is going to be replaced by a robot