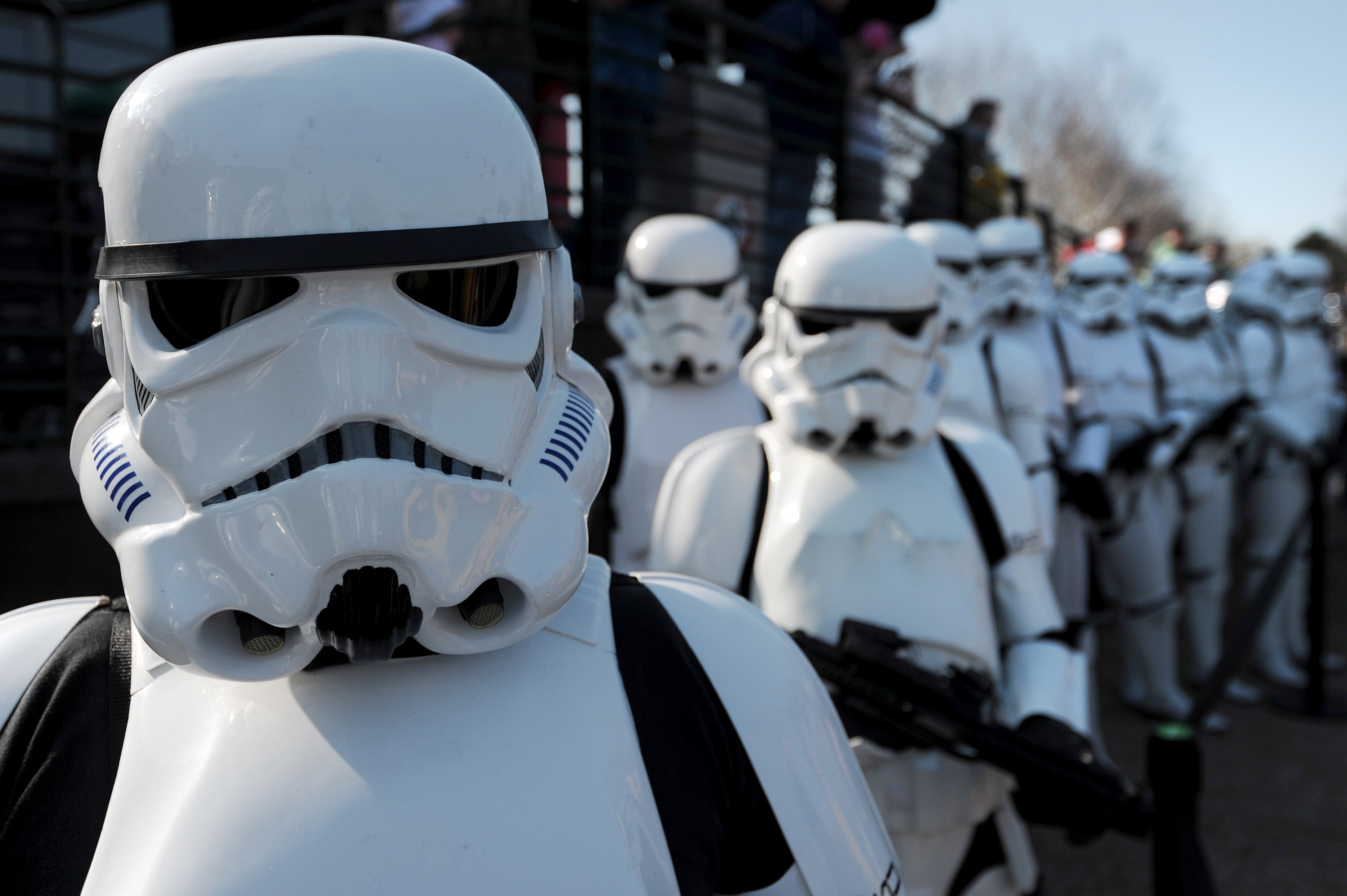 Seth Dotterer is the VP of Marketing at Conductor.

In fact, I learned most of what I needed to know about creating a compelling slideshow thanks to this beloved sci-fi.

All good PowerPoints tell a story

This is hardly an original observation. These days, the business world is overrun with people who use “storyteller” as their job title. (I think they replaced the ninjas and gurus who were so popular a few years back).

But there’s a big difference between appreciating the power of story and understanding how to create a story. And here, I’ll be brutally honest: I am not a storyteller. I am a marketer who figured out how to tell a good business story.

How did I do it? I got help from the experts.

Nancy Duarte, a writer and graphic designer who has written several books on giving visual presentations, has had a huge influence on me. Ditto for Joseph Campbell who wrote so eloquently about the Hero’s Journey, and who so deeply influenced George Lucas in the creation of Star Wars. This is the source material for my PowerPoint template.

But as you’ll see, the template isn’t a beat-for-beat retelling of the classic Hero’s Journey because that would make for a truly epic (and way too long) PowerPoint presentation. Instead, I think of this modified template as the structure for the story I want to tell in a few dozen slides.

With a great thanks and apologies to Nancy, Joseph and George, here are the universal beats as viewed through the familiar lens of Star Wars.

From the very first frame, Lucas sets up a world. Yes, the text in the famous crawl tells us that our story is set “a long time ago, in a galaxy far, far away….” but the key audience takeaway is that this is an epic battle between good (the Rebels) and evil (The Empire).

That’s the paradigm we’re working with for this story and throughout the trilogy, and if Lucas had failed to set that up from the start, all we’d have are some pretty cool effects without much in the way of meaning.

By the same token, if you fail to set up your world at the top of your presentation, you’ll never be able to get your audience to identify with the story or takeaway the right message from your ending.

Illustrate a challenge to the world

From the moment we first meet the Empire, we know that they are the challenge to our world. The Imperial Storm Troopers appear ruthless and unstoppable because they board a diplomatic ship and shoot anyone who gets in their way. Darth Vader is definitely the bad guy, not just because he wears black, but because he chokes a man who surrendered moments earlier and then flings him against the wall.

The Empire isn’t just a challenge, it is the challenge, and from here on out the film’s audience understands that the Empire threatens the world order. Which is exactly how you want your audience to think about the challenge to the world you’ve described. So if the challenge doesn’t seem like a credible threat to your world, you need to go back to the drawing board.

Show the impact of doing nothing

Of course, we all need convincing. We know the Empire is evil, but do they really need to be stopped? That question is answered with a resounding yes the moment we see the Death Star blow up Alderaan. If someone doesn’t do something, entire planets will be blown to smithereens.

There is no greater call to action because the stakes couldn’t be any higher.

If you don’t take this moment in your presentation to convince your audience that their failure to act will be catastrophic, you may get a polite round of applause, but you won’t get buy-in for your solution.

When we meet Luke, he already knows about the rebellion. In fact, he has wanted to join the rebellion for a while, but obligations at home have kept him stuck on the galaxy’s least interesting planet. He’s our hero, all right, but without a change agent, he’s literally going nowhere.

Enter Obi-Wan. He’s not just some old desert hermit, he’s the embodiment of The Force, and he’s about to give Luke a crash course in all things Jedi.

Just as Obi-Wan takes the opportunity to show Luke how to dodge Storm Troopers with the Jedi mind trick and swing a lightsaber with his eyes closed, this part of the story is your chance to tell the audience why your idea changes everything.

Show how a hero can rise to the challenge

The very first time I watched Star Wars, I was disappointed in Obi-Wan’s decision to sacrifice himself in his duel with Vader. I wanted Obi-Wan to put up a fight, to go down swinging his lightsaber. It’s not until we hear Obi-Wan’s voice say, “Run, Luke, run,” that we realize there’s another way for our hero to confront the challenge.

This is the turning point in Luke’s story, not because Luke and Han complete their rescue mission, but because for the first time we know that The Force gives Luke an edge. It’s also a turning point in your story because this is the moment when your audience needs to be see that your answer to the challenge is the only viable solution, which in turn, will make them ask:

How will the hero’s actions save the day?

Of course, Han is wrong. Luke does have an answer—The Force. The moment Luke switches off his targeting computer, closes his eyes and fires his photon torpedoes, the world is changed forever.

We now believe in The Force, a solution we didn’t even know existed when the movie began. That’s powerful storytelling. That’s exactly how you want to finish your presentation, by showing your audience how they can take your solution and use it to meet the challenge that’s threatening their world.

Typically, creating a PowerPoint is a collaborative process. But when you work collaboratively on a creative project, there’s a good chance that your approach will be very different from the people you work with.

Han Solo had his blaster, Luke Skywalker had his lightsaber; I create text first to inform my visuals, my boss starts with the visual and works back to the text.

Ultimately, there is no right or wrong approach here, but what’s critical to creating a great PowerPoint is the ability to understand and appreciate your own process and how it differs from—and compliments—the processes used by the rest of your team.

I’ve seen Star Wars hundreds of times. I’ve watched it in theaters, at home on VHS (yes, I go way back) and on DVDs using state of the art home entertainment systems. I’ve also watched it on my laptop on a plane, and at some point I’ll probably watch it on a phone.

While the content is always the same, (except where it’s been, uh, ‘enhanced’) the experience really does change depending on how you view the movie. The same is true for PowerPoints. There’s a world of difference between a PowerPoint you deliver in person and a deck that you leave behind.

If I’m giving the presentation in person, I always like to begin with a personal story. But while that can be an engaging tactic in person, it falls flat when we just email the deck. So when I create a PowerPoint, I always try to take into account how my audience will consume my presentation, and if necessary I create multiple versions of the same PowerPoint for different occasions.

Give the audience the story they need, in the medium they prefer, and you can’t go wrong.

Read next: What I learned about leadership from watching ‘The Walking Dead’

Read next: SoundCloud is launching its subscription music service with Warner Music Group in 2015