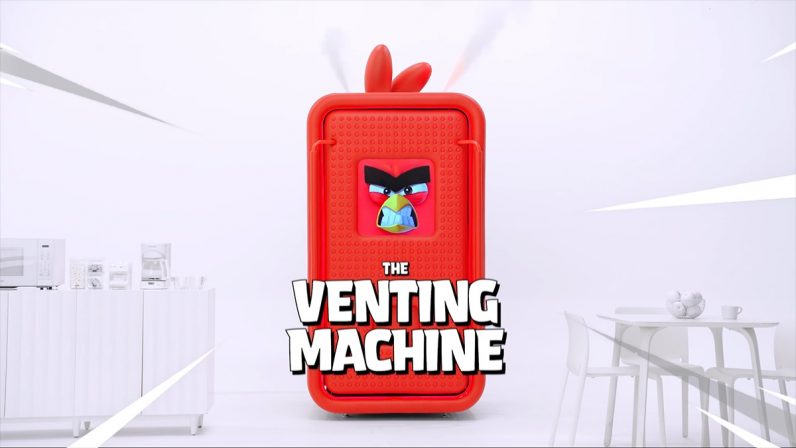 In a recent NPR poll, 84 percent of respondents said that people were angrier today than they were a generation ago. And who can blame us? The idiots representing (insert political party you hate here) are full of crap and they don’t know what they’re doing. So many people are wrong about AI and vaccines, and other things you care about, it’s enough to drive you bonkers. And way too many people care way too much (or not enough) about that stupid (or important) movie that just came out (or is about to). If only there were some way we could all just harmlessly vent our frustrations.

Enter Rovio, the company responsible for 10 glorious years of Angry Birds. It’s pulling out all the stops in celebration of a decade’s worth of smashed pigs and a gazillion downloads with its #BringTheAnger campaign.

More on this beauty in a moment.

But first, in case you missed it, last week Rovio showed off its “Rage Rider,” a scooter powered by screams of frustration and rage.

The video starts with “We’re angry. You’re angry. Everybody’s angry,” a sentiment that seems to sum up the past decade with chilling insight. Unfortunately, you and I can’t ride the Rage Rider. Per Rovio‘s website:

These exclusive scooters are engineered by Spin, the Ford-owned micro-mobility company. While the Rage Riders are not available to the general public, fans can see them in action via the reveal video or through the campaign’s “Squawk Squad”, consisting of popular YouTube creators like Tanner Fox, Team Edge, and Deestroying.

And that pisses me off! I didn’t even want to ride the stupid scooter until I found out I couldn’t. I have half a mind to travel to New York this week so I can give those video game makers a piece of my mind.

But I won’t, because apparently someone tipped Rovio off and they’ve hired some extra security. More from its website:

Accepting anger as its payment method, the “Venting Machine” offers special prizes for anyone willing to give it a good bash, shout or shake. To get the most use out of this furious machine, Rovio is debuting the Venting Machine in one of the world’s most infamously agitating destinations: New York City’s Times Square! The Machine will be available for one day only (northwest corner, 45th St. & Broadway) on 21 November between 12pm-8pm ET.

Showing passers-by how to #BringTheAnger and convert their rage into rewards will be WWE Superstar The Big Show, who will be demonstrating the unique properties of the Venting Machine.

I may be angry, but I’m not stupid. I saw what The Big Show did to Brock Lesnar back at Survivor Series 2002 (say what you will, but through a convoluted route I managed to become obsessed with WWE Network after reviewing NBA 2K20, and I’m never looking back).

Needless to say, I’ll be avoiding New York this week lest my mouth get me choke-slammed. But, if you plan on being there on 21 November, head on down to Time’s Square and give the “Venting Machine” a good whacking, apparently you’ll earn some prizes.

If you can’t make it, you can still download and play Angry Birds 2 on your mobile device to support a good cause. Rovio will donate $100K to UNICEF’s Education in Emergencies fund, which supports education for children in conflict zones and other emergencies across the globe. All you have to do is play to participate, the game is free.

Rovio promises to unveil more fun (I mean rage-inducing!) events and activities from now through December during its #BringTheAnger campaign. Check the website here for more info.

Read next: Google will sell a $15 'Claw' to attach your Pixel to the Stadia controller