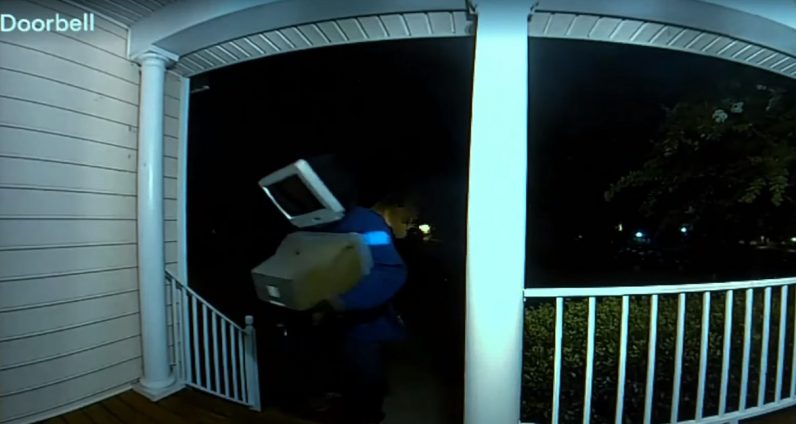 About 60 residents in a Virginia neighborhood awoke Sunday morning to find vintage TV sets had been left on their property. Footage obtained from several homeowners’ security cameras show a person wearing a mask in the shape of a TV casually setting the appliances down and walking away. Police believe it to be the work of teenage pranksters.

We’ll start with an obvious disclaimer: don’t go sneaking around at night leaving box-shaped objects on people’s property. More than forty-percent of US households have at least one firearm and Virginia is a stand your ground state. If police are correct and this is a prank, it’s a very dangerous one.

This isn’t the first time the ‘TV Head’ serial-dumpers have struck in Virginia. Local media outlets exactly a year ago this Sunday reported an incident where at least twenty homeowners woke to find vintage sets on their property.

Police don’t currently suspect malicious intent, according to a report from ABC 6 in Philadelphia. An unnamed officer told the affiliate “At most this seems to be more an inconvenience to the community.”

Luckily for the victims, the police have taken the sets away for disposal. The process of disposing of a television set in the US can range from the minor inconvenience of locating and traveling to an authorized disposal center all the way to finding out it’s entirely illegal in some states or cities to dispose of a TV anywhere. Maybe the perpetrators were just getting rid of some trash.

Local residents appear mostly unperturbed, if not a bit confused. Homeowner Jim Brooksbank, one of TV Head’s victims, told ABC 6 “He’s committed to his trade. He wants to be known as the TV Santa Claus. I don’t know.”

While it appears as though there’s no political motivation or specific target for the so-called prank, the creepiness factor alone is enough to rattle some folks. In 2014 a community in southern California was worried a predator was stalking young girls in the community by leaving ‘creepy’ dolls on family’s porches. It turns out the dolls were normal dolls, and the woman leaving them legitimately thought she was doing an anonymous good deed. She was a grandmotherly type who wanted to brighten up some kids’ days by giving them dolls she thought resembled them.

Whatever the culprits’ reason for leaving unexpected packages on homeowners’ property in the middle of the night, they face unlawful dumping charges and fines if caught by law enforcement.