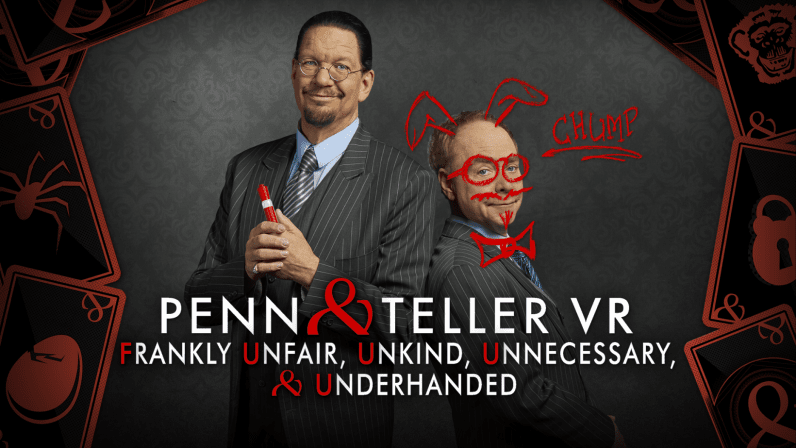 P&T: VR isn’t a game so much as it’s a performance aid, tool for pranksters, or gateway drug for budding magicians. It contains a series of gags you can pull on unsuspecting victims. Basically you’ll watch a “backstage” tutorial for each bit, given by Penn & Teller themselves, that explains how the tricks work. They teach you the setup, explain what your victim will see (they’ll be the ones wearing the headset), and tell you how to exploit their perceptions using VR as a misdirection tool for your real world shenanigans.

If you’re unfamiliar with Penn & Teller you’ve either just woken up from a coma or you really don’t like magic. The point is, Penn Jillette and his partner Teller (just Teller) are world-famous magicians who’ve built their career breaking the rules of magic. Unlike the mysterious masters of the arcane arts, such as Criss Angel, Penn & Teller often reveal the secrets to their tricks as they’re performing them.

TNW spoke with the experience’s lead producer, Mario Rodriguez, to find out how Gearbox translated the pair’s stage magic to VR. He told us:

Penn and Teller are all about breaking the rules of magic and we really wanted the experience to reflect that. This isn’t a game in the traditional sense… in that it’s more about learning how to do a performance like them.

This title isn’t for the faint of heart. While some of the bits are rather tame – including a single-player one that just has you watch Penn & Teller perform the cup and balls tricks – others are terrifying. Several of the tricks involve keeping your victim busy in VR while you use the distraction to scare them in real life. It’s not all jump scares but many of the gags won’t work on the same victim twice, thus we won’t share specifics in this review.

It’s worth mentioning that the experience has bits that could be problematic for some – people who fear spiders and enclosed spaces, for example. But you’re encouraged to watch the tutorial for each trick so you’ll know what to expect before you subject your friends to the pranks. And, obviously, Penn & Teller aren’t taking any responsibility if you scare your friends to death.

But if you fancy yourself a prankster or performer and you’d like to see your friends terrified, amazed, and probably confused, then this is the experience for you. It’s well-polished and superbly developed, making it one of the games you’ll show off when people come over who’ve never used a real VR headset before. And that’s perfect because they’re the best people to prank in VR.

Again though, this is more than just a bunch of stitched together pranks. It’s also a love-letter to Penn & Teller fans. I found myself grinning ear-to-ear as I watched them perform the aforementioned cup and ball trick, forgetting momentarily I was even in VR or playing an interactive experience. The duo’s exuberance for, well, just fucking with people (in a funny, prankster, non-harmful way) is infectious. I enjoyed watching them describe the bits as much as I did performing them.

Best of all though, the game reminded me what it was like to be a kid daydreaming about pulling rabbits out of hats. This isn’t just a prank-your-friends experience, it’s a meditation on misdirection and all the fun that can be had with magic when you have a few tools, a little inside knowledge, and an unwitting victim.

Penn & Teller VR: Frankly Unfair, Unkind, Unnecessary, & Underhanded is available now for $19.99 on the Oculus store for Quest, and SteamVR for  HTC Vive and Oculus Rift headsets. It releases on PSVR July 9.