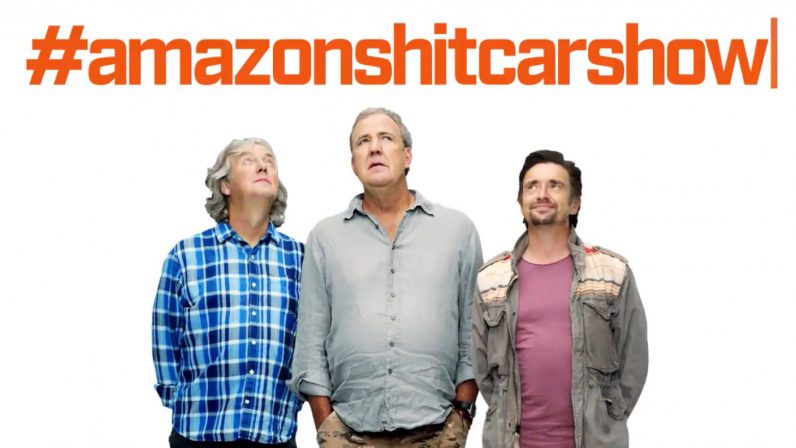 Amazon Prime‘s marketing team recently fired some shots when it called one of the most popular automotive shows on the air today a “shit car show.” Even crazier is that the “shit car show” in question is one of Amazon‘s hit car shows – unbelievable!

If you’re a petrol-head (we think that means “car enthusiast” in whatever language they speak in Great Britain) there’s only one TV show you need to be aware of: Top Gear (UK). But since it’s no longer really British, you’re better off not owning a TV.

Of course, there’s the current season of Top Gear starring the sole surviving member of the cast of “Friends.” But it lacks the strange accents, indecipherable humor, and mesmerizingly off-putting chemistry of the former cast of the now only partially-British program. It’s just a bunch of guys talking about cars now. Wtf is that about?

Instead, I invite you to throw away your TV and watch “The Grand Tour” on an Amazon Fire HD tablet while drinking Amazon Basics coffee from a mug you ordered on Amazon that reads “World’s 2nd Greatest Lover.” We’ve all read Bezos’ romantic sexts by this point; you know it’s true.

Now, I know what you’re thinking: this isn’t anything like the “Top Gear” we used to love so many years ago. And you’re right — it’s not. First off the hosts are old. I mean, like, these guys could be those other British blokes’ grandfathers. Also, the gentleman hosting “The Grand Tour” are neither as British nor as funny as the three fellows who used to host “Top Gear.” I think the small one might be a short American doing an accent.

The point is, that, aside from the completely different hosts, entirely brand-new premise, and heretofore-unseen use of what analysts refer to as “those Amazon dollars” to build a set that’s essentially a mosquito net shaped like a tent, “The Grand Tour” isn’t that bad. In fact, I’d call it a hit.

It’s even a bit funny if you squint with your ears.

If only Amazon, its marketing team, and whoever those guys are that host “The Grand Tour” had a sense of humor, then maybe… just maybe, the company wouldn’t be calling the show “shit.”

And what kind of professional company uses that kind of language anyway. I’m outraged. And clearly, I’m not the only one:

The sheer amount of people that dont realise that #amazonshitcarshow was planned so it would look like shit car show is genuinely worrying.

You just lost a subscriber Amazon. I’ll be canceling my Netflix subscription immediately so I don’t have to watch your marketing team tear apart Amazon‘s hit car show on Prime Video.

Read next: Popular travel app hands out Trump-shaped stress balls to anyone who books a trip to Mexico