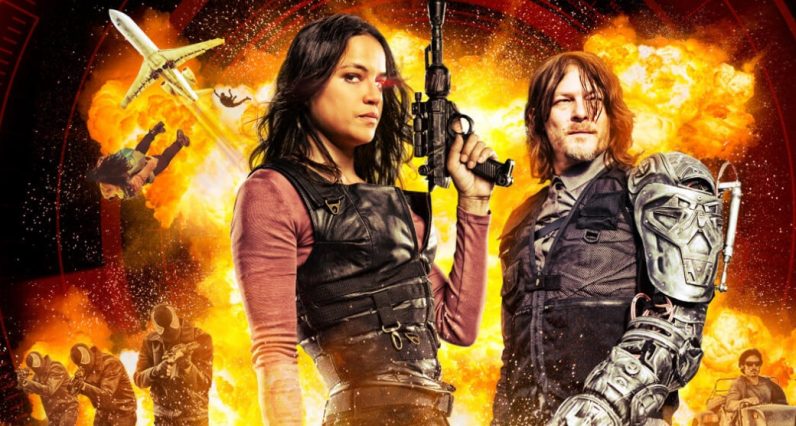 VR is a polarizing technology in its current iteration. On the one hand, for some people it’s an uncomfortable, discombobulating experience. But, on the other, for those of us who thrill in the abyss it’s the closest we can get to living inside our dreams.

If you’ve played the gorgeous little puzzle game Gnog or watched the BBC’s “Home,” A VR space-walk, you know what I’m talking about. These are experiences that are impossible for the vast majority of humans to experience any other way (LSD comes to mind, but that’s a different article entirely).

VR, when done right, reveals those things that reality leaves up to the imagination or those things we simply can’t experience any other way. These are things we all wonder about, such as what it would be like to see our own guts pouring out of our stomach, or what it’s like to get punched in the face by Norman Reedus.

It’s been about a month since Robert Rodriguez and STXsurreal released “The Limit,” an 18-minute live-action VR experience starring Michelle Rodriguez, you, and Norman Reedus. Yes, you’re in the movie – if you watch it.

TNW caught up with the legendary filmmaker to discuss what it’s like making movies at the bleeding-edge without a net. He told us the VR medium allowed him to tell stories in a way he’d previously been unable to:

We found that the first-person POV worked much better in VR than it does in film and television. … I wanted the viewer to feel like they’re right there, in the action, and with this POV I think it really worked.

“The Limit” is an intense action-packed VR experience that puts the viewer smack dab in the middle of a Robert Rodriguez film, which makes it unique among similar experiences you can get with a headset on. This isn’t a developer’s version of a hit movie idea, it’s a legendary filmmaker’s version of a VR experience.

Rodriguez describes the feeling of being inserted into one of his films, as a participating character, as wish-fulfillment. And, he’s right: what fan wouldn’t want to be the focus of their favorite directors’ narrative?

Note: If you’re a fan via his work on the “Spy Kids” franchise, which is excellent, please refer to the rest of his filmography before viewing. Let’s not forget he’s the person who wrote and directed “Machete.”

This particular VR experience is a love-letter to those of us who believe “Grindhouse,” “From Dusk Till Dawn,” and the “Mexico Trilogy,” are among the world’s finest films. You’re getting Rodriguez at his horrifying best here, and that means badass characters, non-stop action, and outrageous gore.

And you’re also getting Michelle Rodriguez at her best. Her performance in “The Limit” is fantastic. After watching it, I’ll admit, I wondered if I was crazy for thinking that was perhaps her best work ever. Luckily, I wasn’t the only person who felt that way.

That’s really Michelle. I’ve worked with her for a long time and I think this part is the closest I’ve seen to the real person … she’s incredibly funny and charming and often that doesn’t come through because she’s usually portraying the tough woman.

In “The Limit,” Michelle Rodriguez also portrays a tough person, but she brings a gravitas and familiarity to the experience that keeps the viewer from getting lost in all the big moments. And there’s a lot of big moments. The bulk of her performance is delivered directly to the camera, which, in this format, is you.

It takes a powerful and skilled actor to pull off the “I’m talking directly to you” bit without flinching or coming off as corny. I can’t overstate how excellent Michelle Rodriguez is in the film: her performance alone is worth the cost of admission.

The story is exactly what you’d expect from the man who directed “Planet Terror.” You’re a mysterious person whose been attacked by equally-mysterious agents and only Michelle Rodriguez can save you (for now), plus science-fiction and gore.

Rodriguez does what he usually does here: he takes a concept that sounds like something from a B-movie camp-fest and makes you believe it’s art.

He uses the VR technology to amazing effect. The movie exists in a half-dome that’s slightly bigger than 180-degrees. This lets you glance back at a row of theater seats to orient yourself during the film (and you’ll need to).

It also adds a necessary ground-truth mechanism to gauge the larger-than-life set pieces and actors by. Michelle Rodriguez is still 20-feet tall, just like she’d be on the big screen, which makes it feel “normal” to watch the movie but surreal to “live” in it.

“I thought, the people who are into new technology, like VR, are probably into the kind of stuff that I make,” Rodriguez told TNW. He explained that the idea for “The Limit” came from a conversation with his son, Racer Rodriguez.

I said, “you’re such a great storyteller, you should make a film,” and he said he was interested, but he didn’t want to make a movie or a TV show. He told me that, if he did it, he’d want to do it in VR … I thought it was a great idea.

Despite his reputation as the “one-man film crew,” Rodriguez didn’t do his usual write/direct/film/score/edit routine here. On “The Limit” his son, Racer, took over writing duties while his other son Rebel performed a large portion of the film’s score.

The end result is classic Robert Rodriguez mixed with cutting-edge technology and the promise that long after the 50-years-young legend stops making films his influence will live on.

I can’t recommend this experience enough for anyone who enjoys a good over-the-top actiony gore-fest, owns a VR headset, and has about six dollars to spend.

It’s not perfect, and if you’re prone to VR-sickness this probably won’t be up your alley, but it’s the closest we’ve come to a “proof-of-concept” for what an A-list immersive film experience can be like in VR.

You can get “The Limit” on virtually every headset and VR platform, including Steam, Oculus, Daydream and more. Check out the official website for more information.

Read next: Influencer marketing needs to clean up its act in 2019