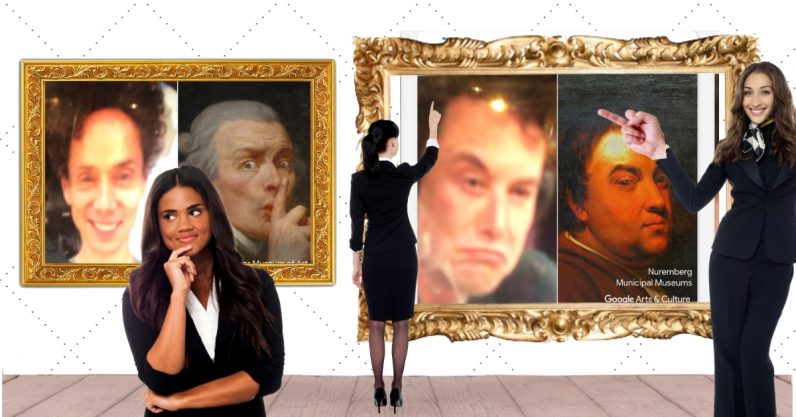 Ever have one of those weeks where you feel like everything is going wrong in the world? Us too.

The planet is melting. There are powerful idiots all over the world with their greasy fingers hovered over big red doom buttons. Our favorite celebrities have dumb opinions we don’t agree with and choose to share them. And again someone finds a severed toe in their Big Mac.

This week seemed especially long, which a lot of people saying stupid things we disagree with, so we decided to round up the worst of the worst. We used the Google Arts & Culture’s Art Selfie app thing everyone’s so into and took photos of the things that bummed us out most.

Welcome to the Internet’s Shit Museum, curated by us.

Everyone, gather round for the first stop on the Shit Museum tour. This week, as you might have seen, Elon Musk doubled down on some truly heinous, and unsubstantiated, accusations he’s made.

Elon Musk sent me an email last week. In it, he accused a British cave rescuer of being "a child rapist" who took a "12-year-old bride." He didn't provide any evidence of those claims.

He also called me a "fucking asshole."https://t.co/EIAjzEJXiY

Of course he did. When does Elon not make it onto our shit list these days? For this, he earns a spot in the front foyer of our museum.

Here is the Cusi Chimpo painting. Completed in 1616, it has lived in Los Angeles’s J. Paul Getty Museum for years before it was sent to the Shit Museum via a mini submarine.

But why stop there? He also appeared on Joe Rogan’s podcast this week, wasted a joint by not inhaling when smoking, and, just because we’re extra annoyed at him, gets a second portrait.

Welcome to the second stop of the museum — the “deserves a second chance even though there are multiple allegations against him” east wing.

Don’t you hate it when your faves have different opinions than you? And YES, we know that’s normal as we’re all unique snowflakes with unique snowflake patterns, but we were in a bad mood when curating the museum and don’t care.

Robin Wright and Kevin Spacey both get individual portraits in our Shit Museum.

By now, you’ve probably seen that Colin Kaepernick is the face of Nike’s new Just Do It campaign. The activist and NFL football player has been at the forefront of discussions against police brutality in the United States — and a huge thorn in the side of American conservatives.

The announcement brought the lowliest swamp weasels of the internet out to play, many of whom started to destroy their Nike sneakers in protest. It was pretty funny, not only because destroying an already-purchased pair of sneakers does not take money away from the company, but also because it sparked a lot of funny parodies.

This was our favorite:

My name is #Mustard and I stand for the #flag and to honer @bigandrich and their Soundman & the Prresident I am going to burn my #Nike shoes!!!!!!!!!🇺🇸🇺🇸🔥🔥 pic.twitter.com/MLv6uwGLsv

We tried to make a portrait of this guy’s fake burned foot:

It didn’t work. So, instead, we’ve made a hyper-realistic sculpture of the foot, and have put it on display instead. Please don’t touch.

So, The New Yorker’s Festival of Ideas announced Steve Bannon as one of its headlining speakers. A lot of people were rightfully pissed that they were giving someone who is largely regarded as a member of the far right a platform. Bannon was ultimately dropped, but not before Malcolm Gladwell weighed in:

If Malcolm Gladwell really wants to expose New Yorker festival-goers to ideas that will take them out of their comfort zone, he should organize a bunch of panels with their nannies and doormen pic.twitter.com/wd6KOyP5Nn

Luckily we found the perfect representative for him. This wing of the museum requires total silence, something Mr. Gladwell should have paid attention to.

You see? Even his portrait is telling him to hush. Self-referential. Self-reflexive. So avant-garde.

We’ve come to the end of our tour. Wow, this was cathartic or what?

Yes, we know. This museum is full of a lot of flippant, highly subjective opinions. We know none of the subjects of these portraits personally, nor are we representing the full story of each. But isn’t this museum just a reflection of how the internet works? You go online, and flip flop between hysterical laughter and angry tears of frustration.

It’s great. I love being hostage to my own emotions.

Anyway, thanks for visiting the Shit Museum. We hope you come again soon! Please leave a donation on your way out, and yes, the only exit is through the gift shop.

Read next: The Tor Project's new Android app for anonymous browsing is here