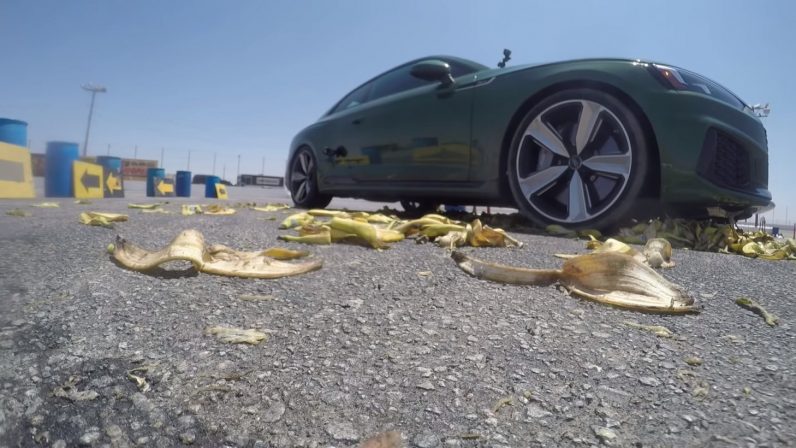 We think it’s astounding that no one has ever attempted to win a NASCAR or Formula One race by dropping a banana peel from the back of their car on the next-to-last lap. Don’t judge us, you don’t know — it could work.

Actually, it probably wouldn’t. But it might. Hoonigan did an experiment, but we wouldn’t exactly call it science, so we’re more confused than ever. We were going to reach out to a physicist or something, but we can’t stop watching this video over and over:

The team’s driver takes a few laps around a private track – don’t try this at home in your minivan – using an absolutely gorgeous all-wheel-drive beast called the 2018 Audi RS5. Good luck making that thing spin off the side of the Rainbow Road.

Except, according to the gentleman at Hoonigan, it did actually slow the car down a bit. During the video the driver correctly predicts he’ll suffer a bit of understeer (he thinks the car will go a bit wide) before he subsequently does.

In the end it appears the banana peel attack, which took a lot of bananas to pull off, shaved about a second off of the Hoonigan team’s track time. There’s nothing scientific about this test, but it sure is fun to watch.

Check out more of Hoonigan’s ridiculously cool car videos, including other wacky stunts from the Scumbag Labs series, on its YouTube page.

Read next: What companies that value raw data understand about analytics