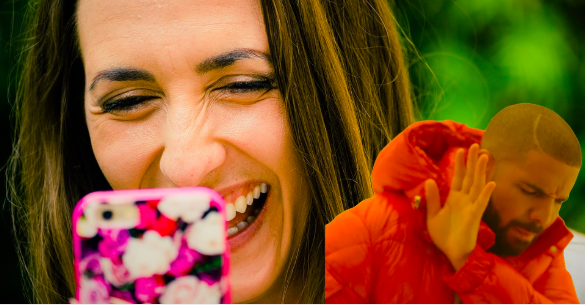 Have you ever heard of a musical artist named Drake? Of course you have. Because he’s everywhere.

These days, it’s hard to miss Aubrey Graham, the rapper and singer from Canada (eh).

He recently released Scorpion, and the internet went nuts, as it always does for Aubrey. Out sprung the #InMyFeelings challenge, reminding us all how simultaneously annoying and captivating dance challenges can be, and endless Instagram captions referencing Drake lyrics. Endless.

“I listen to heavy metal for meditation… no silence…” @champagnepapi

Seriously, on any given day since the album’s release I could probably lyrically recreate his entire discography from the day’s feed.

Drake is a human meme. This is nothing new. But what is it about Drake? Why are his meme-like abilities so powerful? Why Instagram?

I set off to discover the truth.

Like I said before, Drake as a meme is not a new phenomenon.

I asked a meme researcher from the University of Amsterdam what it was about Drake that makes him particularly memeable. Despite being a hip hop neophyte, he ventured the following:

…it often has something to do with the basics of humor, mostly through juxtaposing or mixing two or more unlikely cultural objects.

So putting a Trump face on Drake’s already awkward dance surprises you, i.e. it makes you laugh.

But for Drake in particular, it might have to do with the fact that he’s ‘versatile’ enough to be used in many different contexts. He provides enough material for people to make him into whatever.

The idea that Drake captures the internet’s attention because he puts out a lot of material is echoed in the article “A Brief Anthology of Drake’s Reign as Lord of the Memes” from Crack Magazine: “…he’s the embodiment of a culture where grabbing headlines by constantly dispensing short-lived fads is a viable means to global superstardom. Even if you don’t like him, he’s there.”

Drake is well aware of the hold he has on the internet’s attention — he often RT’s and shares fan-made memes, his music video for “In My Feelings” incorporates the viral videos the song inspired… he even has an emoji tattoo. His album track lists might be getting longer and longer — Scorpion was almost 90 minutes in length — in part because he’s giving us more material to meme.

Like Crack says, “Sometimes it’s hard to tell if Drake is popular or if he’s just abundantly present.”

The music itself is also ripe for memes — a mix of hip-hop, r&b, and pop with an infamous emotional range. He can go from hard to soft in the space of the same album, the latter of which often results in yet more memes. Drake carries with him a dramatic flair and sense of humor, and his willingness to bare all allows him versatility.

To sum up, quantitatively and qualitatively, Drake gives the internet a lot to work with.

This is all theoretical, of course. So we decided to test it out. By sliding into a bunch of strangers DMs.

All in all, I reached out to ten people, most of whom I found by searching Instagram for #Drake. Most did not respond, but eventually I wound up with three answers to the question: “Why Drake?”

The first was Rachel, a PhD candidate and close friend of mine who I’ve teased countless times for her abuse of Drake lyrics as caption. Literally:

She said: “… (there’s) something about how he’s really self aware of his own humor and realness at the same time. It kind of demonstrates a way to be real with your feelings but still be able to joke and have a laugh about it nonchalantly. It also gives women listening to the lyrics more emotional power in the situations/relationships they are in. I’m still not over Drake and am here for his content to get me through the summer lolol.”

He replied: “I think he’s a hit maker. So a lot of his songs are popular. But they also become like anthems… they describe people and their lifestyle in some way. Drake has one liners and song titles that are popular and part of the youth culture today. He appeals to that market massively.”

And finally, Karim — a Toronto native:

Life too short, I gotta get it before they blow the whistle

Karim said: “I think there’s a bunch of reasons. He’s so mainstream that if you post something Drake-related people will actually understand the reference… if I posted lyrics by Future or 21 Savage there’s a good chance no one’s ever heard it before.

But I think the big reason is that Drake makes music for every occasion. There’s a Drake song for everything, so it’s easy to find a lyric of his that relates to whatever you want to post on IG. I used to do it but now too many people do it so it’s become cliche.

I think Drake is a very genuine artist, though. You can see the authenticity in his lyrics — he doesn’t lie about being born in the hood, he wasn’t that poor and he doesn’t pretend to be. He raps about stuff going on in his life, and at the same time he also makes dope club bangers. It’s pretty easy to find a Drake lyric that fits your mood.”

All in all, the results seem to match — Drake puts out a TON OF STUFF. His albums are long, are released almost annually, and leave room for an incredible range in emotion, style, and topic. Instagram captions are perfect for one-liners, and he gives us plenty.

Asking the people who post his lyrics on the ‘gram, I also realized the way his lyrics are used as a common language — they’re mainstream enough for people to recognize, but genuine enough to post without them feeling lame.

In between albums, Drake satiates his audience’s appetites by participating in self-referential meme culture, all the while making fun of himself. And we eat it all up — the #InMyFeelings dance challenge even had people throwing themselves out of moving cars.

Drake knows what the internet loves, and he gives it to us.

Don’t get me wrong, I love a good meme. But if I read someone “only loves their bed and their momma” again…

Read next: What would a genius like Tim Ferriss do? Here's how to get your head and heart working together