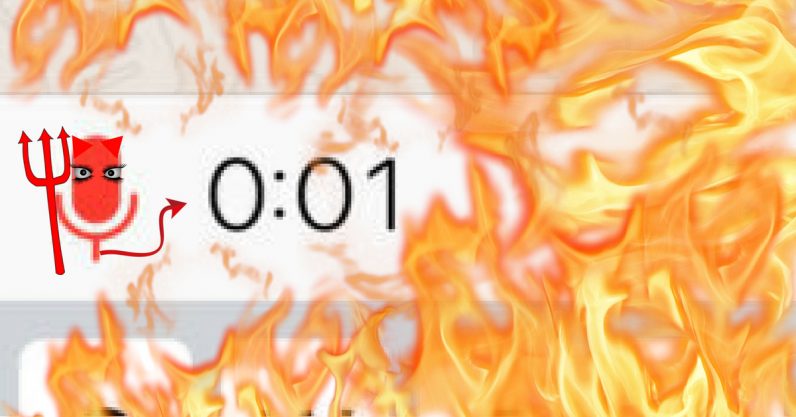 I have a friend, and she’s great. Better than great, actually. She’s one of those people who is just incredible at everything.

She’s really smart. Like really really smart. While I spent my university years vomiting in a bar’s mensroom urinal, she was studying late in the library.

She’s a teacher… and she teaches underprivileged kids. And she’s a vegan. So she’s also a really good person. And not only that, but her hair is really long and shiny, and she has really really nice teeth.

If I didn’t love her so much, I’d probably hate her guts.

She does have one monumental flaw, however, that’s causing me an insane amount of grief. So much grief that I might sever all communication with her soon.

Homegirl sends voice notes. And I hate it.

Why the end of the world is coming

What are voice notes, you ask? Why, they’re only the most poisonous piece of audio that has ever occupied megabytes on my phone. They are recorded audio messages afforded by apps like WhatsApp. You hold the microphone icon, speak, and send the recorded note to whoever you were texting.

I am technically an adult, which means I’m expected to not react to everything with every irrational feeling I may have. Most of the time it’s fine… but then I saw The Times, one of my favorite papers, published an article by writer Pandora Sykes titled “The rise of the voice note”

Sykes writes on how motherhood has made the need to free up her thumbs more imperative than ever: “…voice notes are not only lifesavers for baby mommas, they are also a shorthand in efficiency for all humankind (particularly, and unsurprisingly, for millennials.),” she said.

I get the appeal if you need to juggle babies, but my god, are we really starting to look to a group of people (of which I am a member) who like to propose to each other with avocados for how to communicate?

“Who doesn’t get a thrill from the sign of a blue microphone alert on their home screen?” Me.

“Five 30-second voice notes can achieve what 20 emails can, with buckets more personality.” No.

The end of the world is nigh.

I should probably give a reason why I hate voicemails so much. Well, guess what, I’m going to give you five.

When I receive a voice note, I have to pause my music. Do you think that’s nice? When I’m grooving to some Justin Bieber, do you think I want to pause those sweet angelic vocal chord vibrations to listen to your nasal-y chatter? I don’t. I don’t think so at all.

Second, you’re forcing me to switch my method of communication. I chose to text you. Text. That’s typing. I did not call you. Now, out of fear of being rude, I have to return with a voice note of my own. You’re forcing me to speak, which brings me to my third point…

I HATE the sound of my own voice. I know, we all do. Science says. But my voice is different, I’m convinced. It sounds like the character Donkey from Shrek but in a muffled tunnel. No, like Donkey is being drowned in acid and is shouting for help. That doesn’t make any sense? Doesn’t matter. All that matters is I don’t want records of my voice floating around.

Socially pressuring me to respond with a voice recording of my own is irresponsible, and quite frankly should be illegal.

Point #4: I don’t want to listen to you rant, you psychopath.

Most people use voice notes because their mother didn’t show them enough affection. I don’t have proof, but I feel it in my gut. Why else would they think talking nonstop for four minutes would be socially acceptable? Sykes acknowledges this in her story: “…they are one-sided, allowing indulgent monologues in lieu of actual conversation. Why don’t we just press ‘dial’, I wonder? Why are we still so scared of an actual phone call?”

Finally, why don’t you just call me?

Actually, I take that back. I don’t want a phone call either.

If you send voice notes, you are selfish. You have interrupted my music. You love the sound of your own voice and you should probably be in jail for trying to force me to do the same.

But you know what? I refuse. Send me all the voice notes you want. Maybe I’ll listen, maybe I won’t. But I’m damn sure not going to respond with my own voice note.

Swallow THAT. Oh, wait, you can’t, because you’re too busy talking to your phone.

But you know, good for you. You’re preparing yourself for that robot takeover just fine. Do you talk to your keyboard too? Does it respond?

I love my friend, but I’m considering cutting off all contact if this continues.

Read next: The fact that we want blockchain to solve every problem is a problem