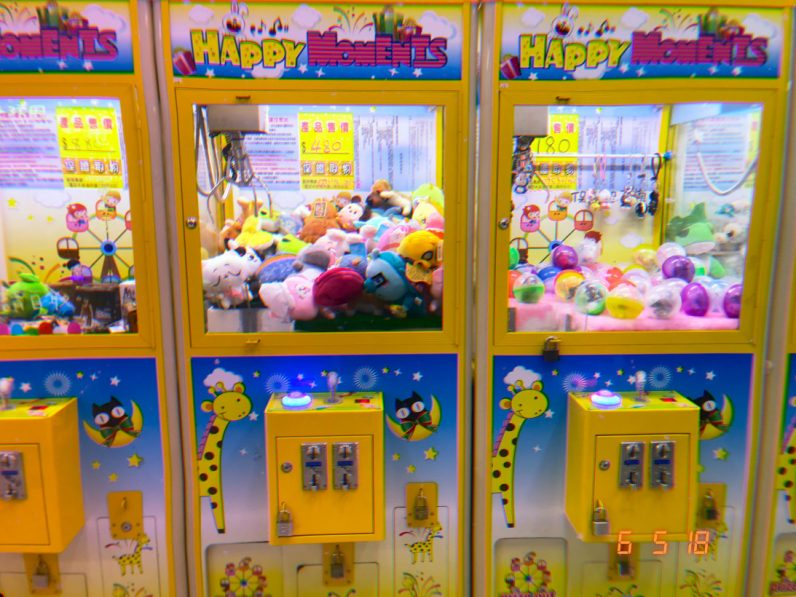 Taipei is game-crazy. From pinball machines to toy dispensers, the gray city blocks are sprinkled with the neon glow of mini arcades, with enticing names such as “Happy Moments” and “Sweet Box” (😬). But no game is more common than the claw machine.

Claw machine games are, of course, not exclusive to Taipei. There are plenty in the United States, as well as the rest of the world, but they’re largely restricted to arcades, dark corners of malls, or big restaurants where parents take their children when they’re sick of them.

But in Taipei, claw machines are undergoing a huge surge in popularity. Not only was I surprised to see so many — it seems like they’re on almost every other block — but I was also surprised that most of the occupants are teens or adults, not sticky, screaming children like in the states.

These claw machines are known by a few different names. 抓物機/抓物机 (Zhuā wù jī) which directly translates into “grab stuff machine” as well as 釣物機/钓物机 (Diào wù jī) or “fish for stuff machine.” A few people playing them told us they were also referred to as “selection machines.”

The machines are open 24/7, and, according to Focus Taiwan, have become a popular spot for older teens and adults to hang out and drink alcohol. While many of the machines house so many furry animals they look like a stuffed toy maximum security prison, many also house a variety of other, sometimes random, items, including light bulbs, face masks, aux cords… even vibrators. Seriously, some looked like a yard sale had upchucked inside it.

Some of the claw machines hold some more interesting objects, like pillows…

The machines’ emphasis on practical items could explain why they’re more popular with adults — but why would adults want to play them instead of buying this stuff from a shop?

One explanation is if you can win first try, these items could cost you as little as $10 TWD. $1 USD is equal to almost 30 $TWD, so you do the math… it’s fucking cheap.

But when asked why she plays the games, one young woman said, “Well…for me… if I can’t get it, i want it more.” Many players echoed that manipulation is a key part of why they play, even though they’re aware of it: “They are manipulative. I got pissed when I lost it and then I played more.”

And, despite how cheap the games are, some visitors to the arcade had buckets FULL of coins. One guy said he only visited the arcades once every two weeks, but when asked how much he typically spends at a time, he wouldn’t answer. He also said he’s only won five times.

We tried it out for ourselves

I walked amongst the glowing glass boxes. I took two laps around the arcade because choice is key — not only in prize but its position within the box, the shape of the object, how good or bad the vibes were around the box, etc.

I scanned the box for the right one, slipped my coin into the slot, and slowly but surely moved the claw into the optimal position. I had it. This penis was mine.

I pressed the button, watched as the claw lowered and perfectly grasped the toy. The claw raised back up only to *very subtly* open its claws and release the little pink phallus back into his pool of friends.

This moment immediately brought me back to my 7-year-old self, lip quivering because I wanted some dirty looking Tweety Bird pillow, and I had just used up all the money I could dig out from the booths in Fuddruckers.

Something more sinister was at play here. I saw the claw slightly slack its grip on my little pink friend. I swear.

It turns out, I might be onto something. One player told me ”I’ve heard that they will let you get it as long as you try a couple more times… more coins… but not sure whether it’s true though.” A google search shows there are many strategy videos, accompanied by just as many conspiracy theories. In a story from the Taipei Times, one claw machine manager, Chang Hsiao-yi (張小翼), said that machines need to be set to not be impossible to win or lose in order to keep people hooked.

It turns out this isn’t the only controversy Taipei’s selection machines have faced.

Firstly, the games addictive nature have caused lawmakers to take action in attempts to prevent them from being placed within 50 meters of junior high, elementary, and high schools, as well as vocational schools and hospitals. This law is already in place for larger electronic game arcades. This came after children were reportedly “spending their breakfast money” on the claw machines.

But it’s not just children — according to the Taipei Times, one woman allegedly spent $6,000 TWD, half the family’s monthly food budget, on the claw machines within just a few days.

Furthermore, the games have been used in exploitative ways. Early this year, a citywide shortage led to the claw machines stocking toilet paper. Last year, a crane game arcade in Tainan City put bikini-clad women in the machines. Videos show the women inside the booth, cheering on the user and posing for photos. In both cases, backlash was quick to follow.

Yet the game machines can also be used in creative ways. Last year, one claw machine manager reportedly bought up a woman’s unsold vegetables at the end of the day, and put the corn, cucumber, and broccoli in the claw machine as prizes. He claims this machine profited three times higher than the others.

Some call it a fad, but considering how much money they make, it doesn’t look like these selection machines are going anywhere anytime soon.

Looking around the arcade at the plethora of cheeks shmushed against windows, eyes pink from concentration and hours of exposure to neon lights, was enough for me to put my change away.

Yet I still found myself looking for these arcades throughout the rest of my visit, gravitating towards their glow on each block. I’d watch other players for longer than planned, groaning along when the claw inevitably let them down as it had done to me.

My advice for those visiting Taipei? The claw machines are cool to see — but maybe save your change for the night market instead.

**Update: A previous version of this article said the cost of playing was .10 $TWD, not 10 $TWD. We’ve updated the story to reflect the correct price.

Read next: In the EU's fight against fake news, disinformation is winning