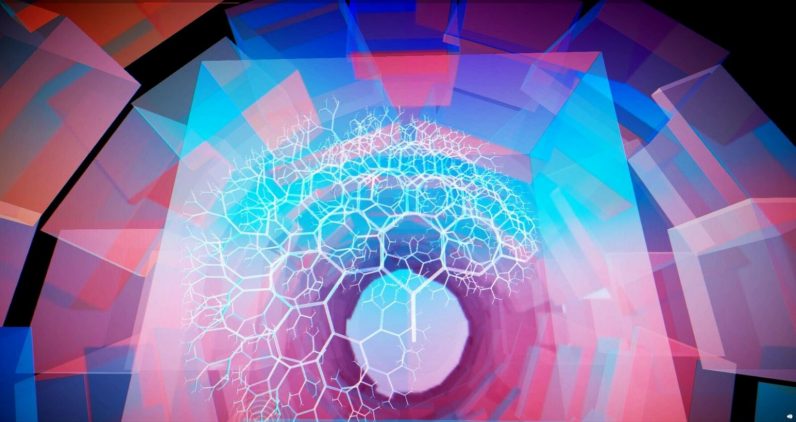 Tell them the tears in your eyes are from witnessing the beauty of Bitcoin as art, not because the dip below 10K has you curled into a corner crying.

Symphony of Blockchains is a mesmerizing live 3D visualization and audio experience that’s not just gorgeous, but also incredibly informative. IOHK, the creators of Cardano, and digital art studio Kuva, have combined efforts to create something that you just have to see to believe.

Users at the IOHK.io website are invited to explore the concept of Bitcoin through interactive art featuring imagery, text, and music. Bitcoin blocks are represented in a chronological funnel which, when interacted with, move and expand. Each block when clicked on, opens to elicit soothing tones and detailed information.

According to IOHK CEO Charles Hoskinson:

IOHK has a commitment to both education and design and this captivating and complex data visualization is the perfect combination of both. It’s beautiful as much as it is functional and our hope is that it will help make blockchain truly understandable for a whole new audience.

To create the work, designers studied crystals in nature and the Merkel Tree in cryptography for inspiration. Once developers decided on a basic structure, they built the fascinating Symphony of Blockchain as an educational tool that’s, arguably, a piece of living fine-art.

The best part is that it’s only the beginning and we will continue to work with IOHK to unveil further blockchain visuals that capture the unique essence of this complex technology.

Blockchain may be one of the most transformative and disruptive forces in the tech world, but it’s a notoriously difficult concept to get across.

This project makes it a bit easier to understand Bitcoin, and the fact that it’s pretty enough to meditate in front of doesn’t hurt. Now just breathe deeply and hodl.

Read next: Net neutrality ruling got you down? You can always build your own ISP