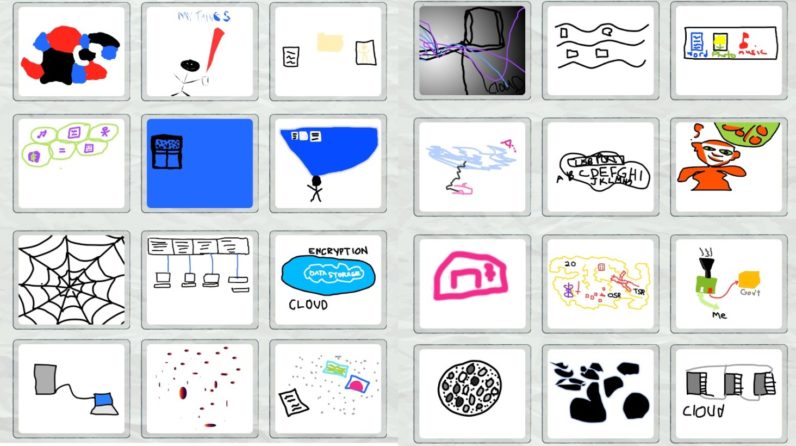 According to a recent study the internet is a blue wavy place that’s used for connecting to people. This insight comes from one hundred people who were asked by cloud service company Summit Hosting to describe how they saw the internet, a computer virus, and the cloud. The best part: they each provided drawings.

Some pictures were on the nose, when asked to draw the cloud a lot of people drew a cloud:

Some of the most interesting submissions came when the researchers asked the respondents to draw the internet:

Others drawings represented a more esoteric approach to depicting the internet: some folks drew Donald Trump.

Others also drew Donald Trump, but they were more subtle about it:

The company behind the drawings, Summit Hosting, was able to glean useful information as well. For example they found out that some people simply don’t understand the cloud. The report states:

When we asked Americans how often they used the cloud, we found even more misconceptions about what it was and how it really worked. Less than 3 in 4 people said they used a cloud-based app or service. Of those who didn’t use it, 90 percent believed digital clouds were either somewhat safe or very unsafe.

Not all clouds are created equal, but most of them can be considered more secure than the average home computer is – no one is going to break into your home and abscond with the cloud.

We reached out to Summit Hosting to find out why they conducted the study and John Bernasconi, a member of the creative team, told TNW:

Simply put, because we knew it would be interesting and fun. On a deeper level, we hope that the study offers insight and gets people thinking about how we use these advanced technologies every day but might not understand how they work on a fundamental level. The world is getting increasingly complex, and it seems that in order to comprehend it, we create simpler and simpler metaphors for understanding

To see the rest of the zany results of the survey check out the company’s blog post here.

Read next: Apple may have unintentionally solved smartphone addiction