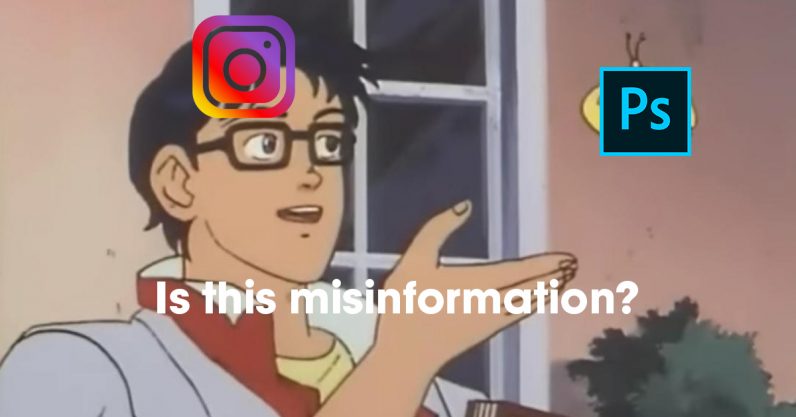 In a controversial turn of events, Instagram has begun hiding photoshopped images on its platform — even in the case of creative uses.

San Francisco-based photographer Toby Harriman was scrolling through his Instagram feed when he suddenly spotted a post flagged for “False Information,” PetaPixel writes. It was a first for him, so he clicked through the warning pop-up, only to find it was simply of photo of a man standing on a rainbow-colored hill.

“Independent fact-checkers say this is false,” the message warned. “The primary claims in this information are factually inaccurate,” it continued, linking to a report from a website called News Mobile Fact Check Bureau, where you can see the original unedited image.

You read that right: A person had reviewed the image (which is clearly embellished for artistic purposes), and concluded this specific piece of art was “false.”

This latest instance of reinforced censorship is the outcome of Facebook’s continued efforts to counteract the dissemination of misinformation with authorized third-party fact checkers. Unfortunately, the move has taken a guiltless victim: digital art.

“Interesting to see this and curious if it’s a bit too far,” Harriman contemplated in a Facebook post. “As much as I do love it to help better associate real vs photoshop. I also have a huge respect for digital art and don’t want to have to click through barriers to see it.”

An Instagram spokesperson told TNW the company uses image matching technology to find further instances of the same image as a measure to reduce the spread of misinformation. The technology apparently flagged the image above as potential misinformation. The post was subsequently assessed by at fact-checker, who concluded it is, indeed, misleading.

The spokesperson also told me Instagram feels it’s the platform’s responsibility to provide users with further context, and inform everyone a piece of content has been “debunked.”

But can art be debunked? And if yes, does it need to be?

There are artists whose entire careers revolve around image manipulation.

“Photoshop provocateur” Vemix has notoriously placed manipulation at the core of his artistry. Kurt Cobain never hung out much with Eazy-E to my knowledge, but in the world of Vemix, celebrities form the most unlikely unions.

TBT with a Meme "You Know You're Wright" @the_unfriend_zone

Art doesn’t have to stay “true” to the real world. Often, the whole point is to create experience that betray our reality.

Instagram’s new fact-checking measures, though, put such images at risk of extinction

A part of me understands why Facebook deems this move necessary.

The Zuckerberg empire has come under fire for its role in the spread of fake news — notably during the 2016 US presidential election. It has also repeatedly been quizzed about its course of action to tackle the imminent “crisis” of deepfakes.

The decision to hide photoshopped content — even in when the purpose is clearly artistic — strikes me as an attempt to get ahead of this threat.

In all fairness, I’m yet to encounter a photoshopped post that has been flagged for misinformation, even though I follow tons of accounts that engage in creative image manipulations. So, evidently, the platform still struggles with enforcement, and, perhaps, it is still figuring out where photoshopped content fits the taxonomy of forbidden imagery.

Whatever the case is, I hope Facebook goes back to the drawing board and reconsiders its current moderation tactics. Because its latest quest for truth is no help in the battle against misinformation — it’s a disservice to art.

Update January 16, 09:14AM UTC: An Instagram spokesperson reached out to note the independent fact-checker re-assessed its initial review and changed their rating. As a result, the image in question is no longer labelled as false. Instagram will continue to fact-check similar images, though, so the issue is far from resolved.

Read next: Video: We used brain-scanning headbands to have a meditation battle