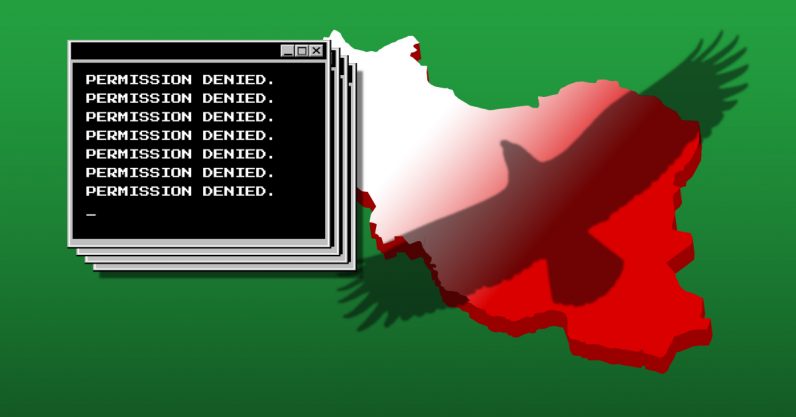 On August 2, Iranian programmer Saber Mesgari received an email from Amazon Web Services stating that the company had to stop providing its cloud services because he lives in a country that is on the US sanctions list. Amazon shut down his account immediately after.

AWS and other services such as GitHub and Google Cloud are services that provide hosting space to developers to put their app. Plus, it also offers tools that make it easier for them to run their apps.

He wasn’t the only developer whose AWS account was shut down. Many others across the country found their services down and suspended by the leading cloud provider – and by extension, the products they built.

Amazon said that because of trade restrictions with Iran, it was limiting virtually all business with customers in that country:

We comply with all applicable laws in the countries in which we operate, including any international sanctions and other restrictions that may be in place for certain countries. Because Iran is subject to broad trade restrictions, limiting virtually all business with Iran, we do not serve customers in that country.

You might not know it, but Amazon runs basically half the internet on their cloud platform. Now they're cutting off the lifeline of Iran's liberal opposition in a misguided attempt to please—far beyond what the law requires—one of Amazon's biggest customers: the US Government. https://t.co/SWjHLxv9JI

Just a few weeks before that, another Iranian developer, Hamed Saeedi Fard, wrote a Medium post on July 26 saying “GitHub blocked my account and they think I’m developing nuclear weapons.”

Three days later, GitHub’s CEO, Nat Friedman, tweeted, unfortunately, the company has to block all Iranian accounts, and the law doesn’t allow them to give developers prior notice. He added the company was not doing this by choice, and would continue to advocate vigorously with governments around the world for policies that protect software developers and the global open source community.

It is painful for me to hear how trade restrictions have hurt people. We have gone to great lengths to do no more than what is required by the law, but of course people are still affected. GitHub is subject to US trade law, just like any company that does business in the US.

Amir Rashidi, an Iran internet security and digital rights researcher, who also works for the Center for Human Rights Iran, told TNW over a call that developers are facing plenty of problems because of the US sanctions:

Developers and startups in Iran are in a trench. Over the past couple of years, they used cloud services like AWS and GitHub to host their code. But now, because of the ban, they will have to either use state-run cloud services and risk surveillance (of customers’ data), or build their own infrastructure, which will take a lot of time and effort.

He added that since opening its first cloud center in 2016 in Tehran, the government has been pushing startups to use local services.

However, there’s a long history of censorship and internet surveillance in Iran. In 2016, Memari News, an independent news site, was suspended for reporting a corruption scandal in the Tehran municipality. In the same year, the authorities blocked eight other news sites for different reasons.

In January, former editor-in-chief for Memari news, Yasher Soltani, was sentenced to a jail term of five years for uncovering the corruption scandal.

In 2016, Ahmad Ali Montazeri, who led the Internet Censorship Committee, said in an interview the country banned 14 thousand websites and accounts weekly as their content was “against the religion and ethics.”

The country has a long history of blocking communication apps too. In 2018, Iran disabled calls, video, and images on the messaging app Telegram. Soon after that, the government banned the app completely, leaving more than 40 million users across Iran in the lurch. At the time, the state, claimed Telegram encouraged “armed unrest,” and subsequently urged people to use its own Sourush app.

Later, developers made two new Telegram clones – Telegram Talaeii (Telegram Gold) and Hotgram – based on its open-sourced code. They were hosted on an Iranian app store called Cafe Bazaar, and reportedly gathered a user base of 30 million combined in just a couple of months.

However, In November 2018, Mojtaba Zolnour, a member of parliament, said these apps were developed by Iranian security agencies. After the Center for Human Rights Iran (CHRI), an organizations focused on highlighting civil rights issues in Iran, reported this to Telegram, the company issued a security warning and deemed these apps unsafe.

The recent blackouts of US-based services such as GitHub and AWS is not new in Iran. GitHub hosts several lists of websites and services that block any IP addresses from Iran. These websites include many of Google’s sites, like Android’s developer site, and Amazon’s Goodreads community for book lovers.

While Google’s Play Store is available in the country, its functionality is limited as it only lists free Android apps. At the same time, many popular apps like YouTube are unavailable there.

Most Android users now have to rely on Cafe Bazaar, an Iranian app store founded in 2011. It currently has over 40 million users and 164,000 apps.

In 2017, Apple started removing Iranian apps from its App Store for iOS devices. While the company doesn’t sell iPhones in the country, several people in Iran import them and get the software from the App Store. The ban resulted in several popular taxi-hailing, food delivery, and shopping apps becoming non-usable.

So @Apple officially did it finally ;( pic.twitter.com/NboTdPoFpC

After Apple removed the Iranian iOS applications, some of the developers lost their jobs. In Iran, we have so many iOS freelancers, and these sanctions affected them.

Last year, Slack, a popular app for team communication, banned users situated in Iran. Bahrami, who was working for a Canadian company at that time as a freelancer, face outages for several days and found it difficult to keep in touch with his colleagues.

While there are workarounds for using apps like Slack, a ban from GitHub, AWS, and other cloud providers pose a bigger challenge for Iranian developers. Instead of focusing on their app’s core offering, they have to build out an infrastructure to ensure their apps run smoothly.

Some companies like ArvanCloud and Cafe Bazaar in Iran are trying to provide cloud services to app developers in the country, but their productre still in the early stages.

“They are young and their product is in the process of development, therefore there are some problems using their product but I believe this kind of problem will get fixed in the future,” says Ilia Vakili, a developer and former CTO of Iran-based cab-hailing company Snapp.

Cafe Bazaar is also in the process of building its own cloud service. The company says it has already begun testing with a few mid-sized startups; it’s now doing everything it can to make the service available to the public soon.

Mesgari, who works for ArvanCloud, says it’s tough to acquire equipment and build services when a lot of common tools are not at your disposal:

We have to rely on third-party vendors to buy server equipment, and pay them in cash through another party. This is an unreliable process and there’s no guarantee of getting quality equipment.

Iran’s tumbling currency and the inability to use credit cards and digital payment services to purchase software or hardware makes the situation even worse for the country’s startups.

Apart from app hosting services, testing and analytics platform such as Firebase and Google Analytics, and email broadcast services such as Sendgrid and Mailgun, are also not available to Iranian developers.

Vakili says while it’s easy to build your own version control system using open source projects like git and host your services on the cloud, products like GitHub and Gitlab are part of a social code for developers:

It’s easy to have your own git server but the problem is that services like Github are like the social network of code and a major part of the open-source community. Github closed Iranian access without prior notice — which I think was much more than what the law requires them to do — and basically made it impossible for Iranians to contribute even in open-source projects. They backed off from this policy eventually.

A bunch of users in Iran uses digital circumvention tools such as VPNs and proxy servers to avoid snooping. However, if these tools are hosted on cloud services such as GitHub, it would be more difficult to access them.

In 2018, one such popular tool called Lantern faced an outage as it was partially hosted on American company DigitalOcean’s cloud service. Recently, another tool called Haystack was found to have numerous security holes that might expose private user data, making it unsafe to use them.

During the Obama administration, the US government lifted certain sanctions from Iran, like importing food, carpets, and other floor coverings from the country. However, in May 2018, President Trump withdrew from the Iran nuclear deal and reinstated all previously lifted sanctions.

This step has put a lot of pressure on tech companies to deny any services to Iran.

Mozilla, which produces the Internet Health Report every year, decided to omit a whole section on Iran 2019. The organization says it was an editorial decision:

It’s correct that one of the topics we researched and drafted an article on was about technology sanctions in Iran. We ultimately decided not to publish the piece this year. This does not mean we don’t consider this topic to be of enormous significance, or that we won’t cover it in future editions. Internet users in all countries affected by sanctions are at a huge disadvantage.

However, people familiar with the matter told TNW the organization removed the Iran article because of legal pressure from US authorities.

A lot of Iranian developers are considering migrating out of the country. Vakili says immigration rate was already high amongst developers, and now, because of the devaluation of currency and bans from tech companies, it might increase.

“As a developer, I don’t know what’s next for us, and these tech sanctions are forcing us to think of leaving the country,” Bahrami says.

This whole saga brings us to a larger question of Internet freedom and its borderless concept as well. Technology companies have talked about connecting people across the world for ages. However, they’ve taken a step back under political pressure to block certain territories.

This also means a difficult decision for developers living in countries like Iran. They have to deal with state surveillance and overreaching restrictions while also finding new ways to connect to the world.  They also can’t rely on US-based tools and technology solutions. For developers in Iran, there isn’t yet light at the end of this long, dark tunnel.

Read next: Quantum dots that light up TVs could be used for brain research