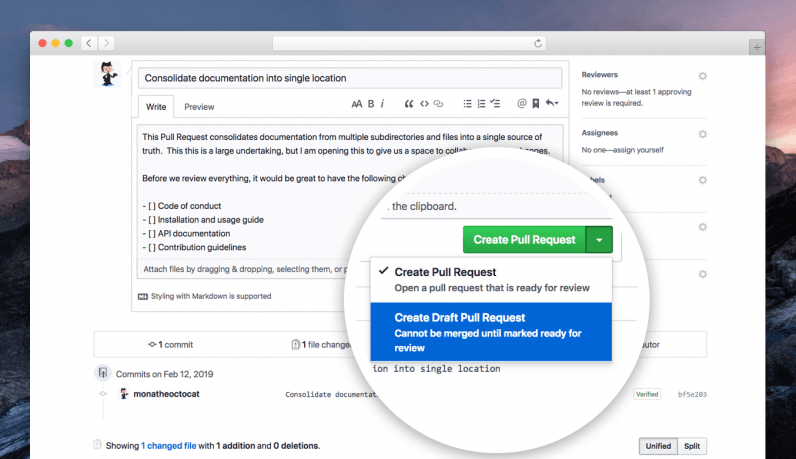 GitHub has added a new feature to pull requests, allowing developers to mark their requests as a draft. Marking a request as a draft allows the developer to highlight to other collaborators that their code is a work-in-progress and requires feedback before being integrated into the main project.

So, suppose a developer has been trying to solve a difficult problem. They could, in essence, create a “minimum viable product” that solves the problem, but isn’t quite ready to be deployed. By marking the pull request as a draft, they can start a conversation about their solution with their teammates without necessarily compromising the quality of the main codebase.

Developers can mark a pull request as a draft simply by clicking a drop-down menu on the site. It’s worth noting that draft requests cannot be merged with the main codebase. This is likely to prevent fat-fingered users from accidentally integrating unfinished code with master branch.

Announced on Valentine’s Day, draft pull requests are a welcome present to the developer community from the Microsoft-owned social coding platform, and comes just one month after it introduced unlimited free private repositories.

That said, I feel as though draft pull requests have the potential to make an even bigger impact to the platform. Why? Because GitHub acts at the nexus of how many professional teams work, allowing them to collaborate on code that will ultimately be used in a production setting. But the social coding platform is also used by those at the very start of their software development journey.

Making the jump from ones tentative first steps with code into working with a team on an important project can often appear intimidating. Draft pull requests are a great way to bridge that gap, allowing journeymen developers to contribute and gain feedback, without potentially harming a project.

To find out more about draft pull requests, take a gander at GitHub’s announcement blog, or its documentation pages.

Read next: Discuss the future of blockchain with Dogecoin and more at TNW2019