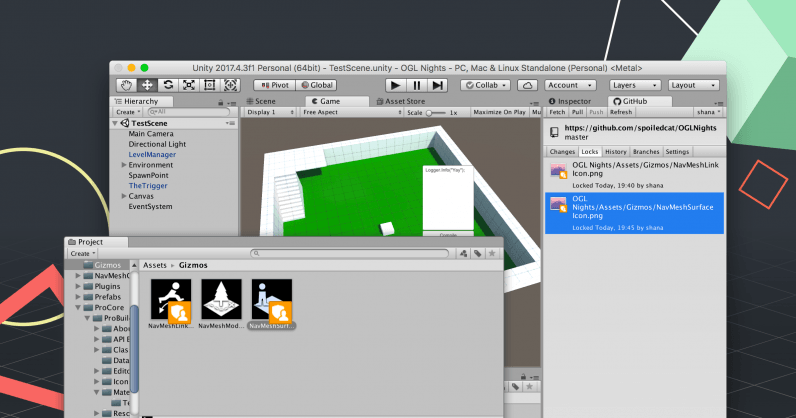 Modern software development workflows are built around Git (and to a lesser extent GitHub). That said, not all projects are created equally, and depending on what you’re doing, using Git can be pretty hard.

Those working in games development, for example, may struggle with Git, due to the fact that they have to manage large binary files, like visual and audio assets.

GitHub has tried to address many of the pain points faced by game devs with GitHub for Unity, which today exited beta with its 1.0 release.

Announcing the release of GitHub for Unity 1.0 featuring the git workflow you love with support for Git LFS and file locking. It is now available in the Unity Asset store. https://t.co/YUm0wT0bM6

The tool was demonstrated at Unity’s Unite conference in Berlin by GitHub developer Andreia Gaita.

Despite the name, GitHub for Unity isn’t intrinsically tied to GitHub — it works with any Git server, including on-premises installations.

It’s not just Git-centric, either. It also includes an LFS (large file storage) client, allowing users to store large binaries in a separate storage. These files are represented in the Git repo with a hash, allowing it to work seamlessly.

GitHub for Unity is designed to deal with the pain-points associated with source management in the game dev world, particularly when it comes to collaboration, branching, and merging.

It allows developers to perform many Git-related workflow tasks within Unity itself via several well-placed GUI elements. If the developer needs to work at the lower-level, they can also access a Git command-line.

It’s also ridiculously easy to deploy. GitHub for Unity itself is tiny, and measures just 1.5 MB. If the user doesn’t have a Git client installed (which isn’t a given, particularly on Windows), it’ll download a pre-configured binary. This receives regular updates.

GitHub for Unity 1.0 is available from today. You can download it here, or from the Unity asset store.

Read next: The EU’s disastrous Copyright Reform, explained by its lovers and haters