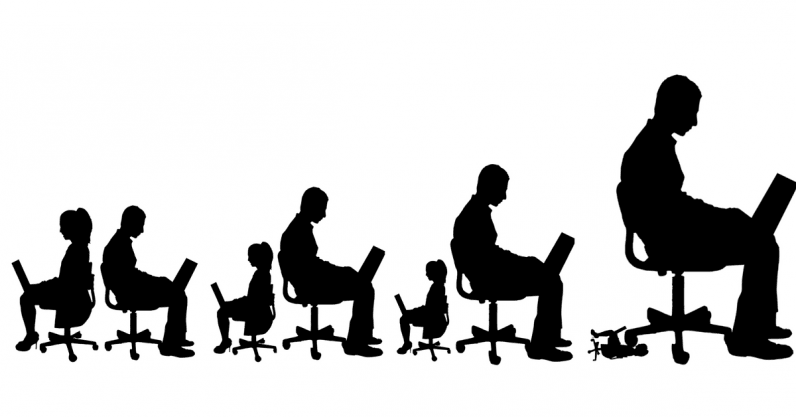 Despite the vast number of initiatives to bring gender equality to the software development world, there’s still a lot of work to be done. HackerRank published its 2018 Women in Tech Report today, which looks at employment trends for female software developers. Among the report’s findings, which were shared exclusively with TNW, it shows that women are struggling to advance in their careers, and increasingly languish in junior-level roles.

Women developers between 25 and 34 also fare badly, and are 1.78 times more likely to occupy junior positions. 46.1 percent are stuck in junior-level limbo, compared to 25.9 percent of men.

There’s still a visible inequality between the very youngest developers, but it’s nowhere near as wide, with a gap of 1.09x. 84.5 percent of women developers between the ages of 18 and 24 occupy junior roles, compared to 77.3 percent of men.

HackerRank surveyed 14,616 professional developers for this study. Participants were recruited from the HackerRank community and through social media, and include 1,981 women and 12,635 men.

Positive trends for women in development

It’s not all bad news, though. The report highlighted several positive trends for women in the software development world, which offer cause for cheer. HackerRank found that women know the most in-demand languages and frameworks, and work in highly lucrative fields.

Over 60 percent of female respondents claimed competency in Java, JavaScript, and/or C. Over 40 percent said they knew C++ and Python. These languages are sought-after by employers, according to Hacker Rank’s 2018 developer skills report.

Women know their stuff. They’re also working in fields that pay well. Over 10 percent of women who responded to the survey work in the financial services sector. Around 3.6 percent work in the automotive industry.

The report highlights another encouraging trend, and shows that the gap between men and women who learn to code under the age of 16 is narrowing. 13.9 percent of women between the ages of 18 and 24 started coding when they were still in school, compared to 20.9 percent of men in the same age bracket.

For contrast, men over the age of 35 are roughly twice as likely to have started programming before the age of 16 as their female counterparts.

There’s a gap, but it’s a lot narrower than in older generations. The survey reflects another trend picked up by HackerRank in the past; namely that older developers started coding earlier than younger developers.

I spoke to several women working in software development, and the broader tech scene. The figures unearthed by HackerRank were unfortunately of no surprise. Allyson Kapin, who runs the nonprofit Women Who Tech, attributed the numbers of women stuck in junior roles to endemic cultural issues.

“It’s encouraging to see the new data showing that the programming gap between women and men are closing. Part of this is due to the significant amount of resources that have been put into scaling and marketing coding programs such as General Assembly, Galvanize, etc,” she said.

“However, we’re still seeing a major gender gap in the hiring ranks where more men are being hired for senior roles compared to women despite similar skill sets. We can’t dismantle the brogrammer culture without ensuring that women are moving into senior programming and leadership roles. “

Cathy White, of London-based CEW Communications, attributed the imbalance in senior roles to entrenched gender roles, and said that addressing the seniority gap is an important battle to be fought, especially if we want to ensure women enter the industry at the same rate as men.

“While the results of this survey are encouraging, they also highlight a key factor that we are in an ongoing battle to address. The assumptions that society put on us at a young age based on what is expected of our gender,” she said.

“One of the key reasons for the initial downfall in women studying computer science or looking at tech more generally, was because advertisers decided to market the computer and subsequent computer games to a male audience in the 1980s. This resulted in a generation of girls being told tech is for boys by those closest to them in society – their teachers and parents – and by the media.

It’s great to see the numbers now increasing, but we still need to battle against these assumptions. If we want to see more women studying tech and succeeding into senior positions in the industry, we need to see more female role models, not just for young girls, but for everyone. We need to continue to challenge the norm and continue to fight for the 50:50 balance, at the top and the bottom.”

Other female developers at TNW blamed the gap on other issues, with one suggesting that the disruption of childbirth and family life plays a role in women being held back in their careers.

A problem worth addressing

Much of the effort to address the gender gap in tech has been focused on getting women through the door. While that’s undeniably very important, this research from HackerRank shows that effort still needs to be made to ensure that women are able to progress in their careers at the same pace as their male counterparts.

You can read HackerRank’s Women in Tech Report here.

Read next: Here’s everything a one-person company needs to schedule and organize like a boss