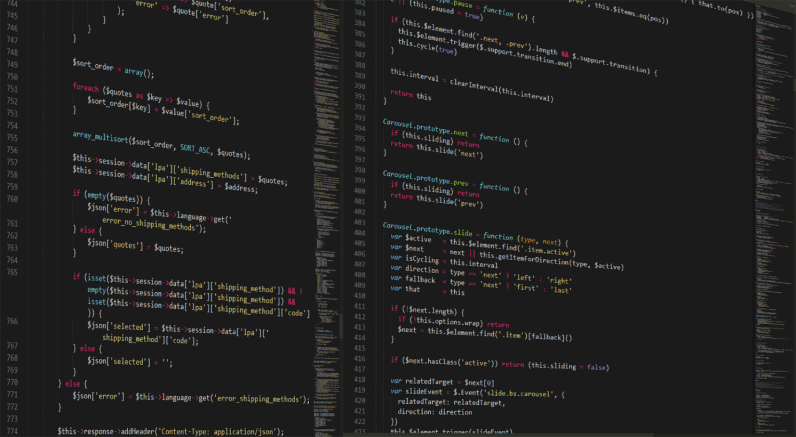 What does 2018 hold for developers? What trends will change the way they work? TNW spoke to developers across a number of segments, and asked what they thought next year would bring. Here’s what they said.

All about the containers

Containerization is a great idea. When you put a bit of code into a container, you’re essentially packaging it in a certain way. It contains pretty much everything you need to run the software — like libraries, tools, settings — and binds it into an executable that you can deploy pretty much everywhere.

Containerized software is consistent. It runs the same no matter what machine you put it on. And because it’s isolated from its environment, and from other containers on the same system, they’re a lot more secure.

Like I said, it’s a great idea. And thanks to projects like Docker and Kubernetes, containerizing software is really easy. In 2018, you can expect this to become even more popular.

Kit Merker, VP of Business Development at JFrog, agrees. “The world needs more reliable software – secure, up to date, performant, resilient to failure – in order to keep all of our daily critical systems running,” he said.

“The introduction of a near-ubiquitous container computing platform that can run democratically on a myriad of open and closed platforms becomes a fundamental building block of Planet Earth’s information, commerce, government, social, education, health, transportation, energy, and industrial systems. The more we can interoperate a world-scale computing infrastructure the better.”

AR and Machine Learning will become even more commoditized (and easy)

Let’s start with augmented reality. Over the past year, Facebook and Apple have thrust their own AR development technologies into the mix. ARKit in particular is a revolution, and people are using it to do some really cool things. And thanks to the WebXR project, it’s now possible to build sophisticated AR apps using web technologies.

“With the release of ARKit and ARCore for iOS and Android respectively, AR capabilities will become more and more mainstream and developers will be challenged to push their imagination and incorporate AR as a differentiating factor in the sea of mobile apps. Despite advances in AR software, we’ll continue to grapple with hardware bottlenecks.”

On the AI front, you can expect much of the same. AI is making its way into almost everything, and it’s largely due to the same trends we’ve seen in the augmented reality world: simpler, free developer tools that lower the bar for entry significantly.

Next year, developers will increasingly take an data-driven approach to problem solving. Monitoring and analytical tools that allow them to identify, break-down, and resolve complex issues in their code.

Tague Griffith, Head of Developer Advocacy at Redis Labs, concurrs. Speaking to TNW via email, he explained that failure engineering and failure analysis will continue to grow and become more codified in 2018.

“Consider databases: there’s this idea of building tools and systems that validate whether databases do what they claim,” he explained.

“Netflix started the trend of the Chaos Monkey, and techniques like ‘failure introduction’ are becoming more mainstream as we start to understand the complexity of systems. Software is key part of our everyday lives and so much of our personal and health data is on our phones, available in cloud. In light of this, automated testing of failure and security analysis will keep building.”

JFrog’s Kit Merker made the case that data-driven analysis can result in significant performance improvements:

“When you first start to improve your development infrastructure you see amazing initial results. It’s like when you start lifting weights you get linear improvement for some time. But eventually you have to dig deeper and do more nuanced improvements to eke out a bit more performance,” he said.

“Measurement of every facet of development from idea to code to deployment to customer feedback will be expected and will help mature development teams focus on incremental gains. This means that those who are only just now investing in improved developer infrastructure might feel like they are making huge strides, but in reality they are scratching the surface of what’s possible. And what got you here won’t get you there.”

Go is a fun language to work with. Like the majority of compiled language, it’s blazing fast. Unlike other languages, it’s built with concurrency in mind, and makes writing code that performs parallel tasks a doddle.

Syntax wise, it’s really easy to wrap your head around, and reads like a happy compromise between C and Python. It also has a thriving developer community that have created libraries and frameworks which extend the language further.

Recently, I’ve been playing around with Pixel — a dead simple games development platform for the Go programming language. Go can also be used to create web applications, although it primarily thrives as a systems language.

Redis Labs’s Tague Griffith reckons 2018 will be a bumper year for Go, explaining “Go the language is gaining a lot of popularity. It’ll become the new system language that developers turn to for performance-sensitive software, where control is key.”

That said, it won’t be the language of 2018. As was the case with last year, that crown belongs to JavaScript.

Developers will enter the industry through vocational study

Finally, here’s a prediction of my own.

Developers typically enter the industry through one of two ways: they’d go to university and study a computer science related topic, or they’d teach themselves how to code. But in recent years, a third option has emerged: vocational study.

Crucially, bootcamps emphasize practical skills over theory. That’s because they typically aim to bring people to junior developer standard in just a few short weeks. That doesn’t leave much time for Djikstra’s algorithm.

Coding bootcamps are booming. Some, like Coding Dojo, have become a legitimate brand, with branches across the United States. One, Flatiron School, was acquired by WeWork earlier this year.

Developers are flooding the industry from these bootcamps. A huge part of that is due to cost. While the upfront cost of a bootcamp can be as high as $15,000, that’s nothing compared to a four-year degree. You can expect that trend to continue, especially while employment outcomes from traditional computer science courses remain dismal.

If you want to read the previous year’s predictions and see how right (or wrong) I was, you can check them out here. And if you want to tell me your own predictions, shoot me an email.

Read next: The ultimate, way too extensive guide to hiring the perfect co-founder