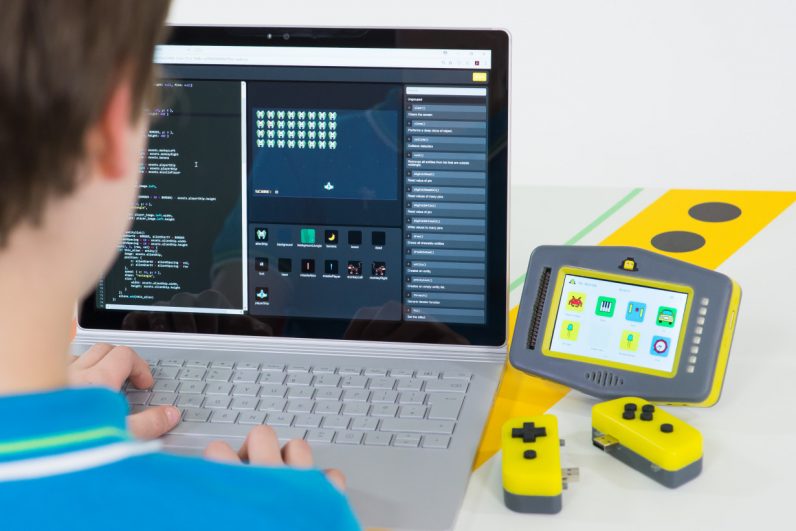 Pip, from Glasgow’s Curious Chip, is a novel take on teaching kids to code. For starters, much like the Nintendo Switch, it works when you’re out and about, and when you’re sat at a desk. Interestingly, it tries to hide as much of Raspberry Pi’s internals from the user as possible. The device’s UI is similar to a smartphone, and it boasts a browser-based development environment that can be accessed by any computer on the network.

The advantages of this are twofold: firstly, it takes much of the complexity of learning to program away from the user. Deploying some code is as simple as pressing ‘save‘ and then ‘run,’ and you don’t have to actually build your own development environment. It’s all there, ready for you to start coding.

But also, there’s a sense of instant gratification you get when using the device. Pip lets you test software you’ve built within seconds, allowing you to quickly fix bugs and re-test without any significant bottlenecks. Programs for the device (which are written in a variety of languages, predominantly JavaScript, but also Python, Lua, and PHP) also execute in the browser, so you don’t have to constantly switch between devices.

Earlier this month, the founders from Curious Chip paid me a visit in my hometown of Liverpool, where I got to play around with a prototype unit for a few hours. I was impressed. The device’s 800×480 touchscreen felt bright and responsive, even though we were in a dingy bar, and it was dark outside.

Although clearly a pre-release model, the Pip’s chassis is rugged and colorful. It’s clearly aimed at kids, and will probably be able to withstand a drop or two (which is good, because it isn’t cheap. More on that later).

At the side of the device are two Nintendo Switch-like controllers. These are essentially vastly reduced keyboards (containing just a handful of keys) attached to a USB socket. Removing these exposes the device’s two USB ports, which can be used with an external keyboard and mouse. Pip also packs a HDMI socket, allowing you to connect it to a TV or computer display.

Pip also lets you play around with physical computing, and lets you connect an external breadboard in order to attach LEDs, motors, and the like.

The operating system behind the Pip isn’t locked down. If you want to insert a NOOBS or Raspbian MicroSD card, you absolutely can. You can also SSH into the device and deactivate the user environment, in order to access the underlying command line.

According to Curious Chip co-founder Jason Frame, users can access every aspect of the operating system, but it’s not something the company is actively encouraging. “We’re not interested in locking this down, but it’s also not a primary goal for us,” he said.

The idea behind the Pip started before the Raspberry Pi was even a thing, explained Frame “When my son was four or five, I started to think about how to teach him programming. When I was a kid, there were 8-bit computers where you could turn them on and start programming. They were simple, and it was possible to master, whereas today computers are much more complicated.”

Frame explained that the first model was like an Amiga personal computer — a box with a keyboard, and a breakout board for electronics tinkering.

“When we started in 2012, there wasn’t much of an effort to get kids into programming. I started to think about the ideal programming environment for a beginner. It would be simple, like systems from the 1980’s, but much more powerful,” he said.

The launch of an open ecosystem, namely the Raspberry Pi, changed all that. The company since decided to focus entirely on building on a device that’s well-established, and has an active developer community. The aim, they explained, is to make learning to code as easy and fun as possible.

And perhaps the boys from Curious Chip are on to a winner. Already, the device has received an enthusiastic response from Raspberry Pi foundation founder Eben Upton.

And as an adult who already knows how to code, I can see some appeal. Pip is essentially a handheld games console that isn’t locked down, where you can make interesting platform-style games just by hacking some JavaScript and clicking a couple of buttons to deploy. As someone with an interest in games development, this is really exciting

Pip goes into crowdfunding today on Kickstarter. According to co-founder Sukhvir Dhillon, the company is committed to producing the first few batches in Scotland. Those who get in early can pick one up for £150. Otherwise, the standard price is £175, against a recommended retail price of £200.