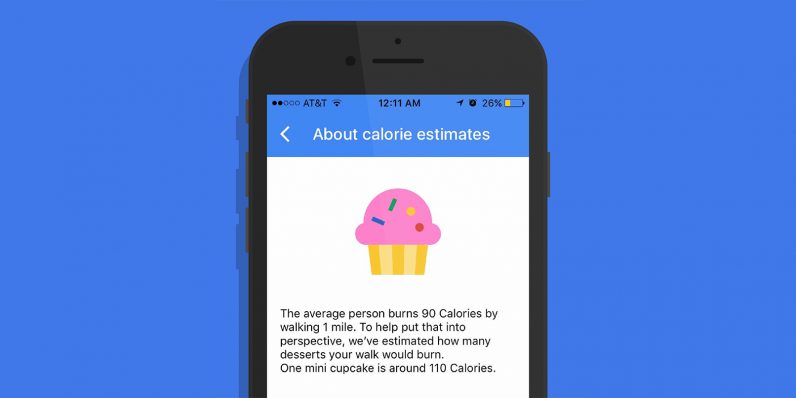 Earlier today, Google rolled out a new feature in Maps for iPhone users in the US, which counted the calories burned when you walked to a certain place and depicted that in equivalent mini cupcakes.

It was quickly panned by many a Twitter user and has already been killed off – that’s perhaps one of the quickest deaths of a feature in a mobile app we’ve seen in recent times.

ty for shaming me for my mini cupcake consumption google maps!!!! pic.twitter.com/nYwNHMJFqa

Users who disliked the feature noted that it could trigger people who suffer from eating disorders, or could make you feel guilty for indulging in sweet treats. In addition, there was no way to disable the cupcake count.

I initially had a hard time wrapping my head around the hate over this feature; I’ve been struggling with my weight for years and I should know a thing or two about food triggers. Clearly, that’s the wrong way to think about this – and about testing design features in general.

The fact is that it’s foolish to assume you know everything about your user base. You can generate profiles based on the data you collect from them, and follow their habits over time, but there’s still a chance that you may have missed something.

While it’s safe to assume Google isn’t out to shame or trigger its users with cupcakes, it clearly failed to test this new feature internally with a representative user base. When you’re a company as large as the big G and have hundreds of millions of users depending on your products, you owe it to them to look for feedback before pushing something new.

That’s not always easy when you’re building an app with a small audience. But it’s certainly worth asking for feedback and assuming that a feature isn’t ready for prime time until you’ve heard what your users think of it. Of course, it also helps to include an option to disable new features until you’re absolutely certain they’re beneficial to the overall user experience – particularly if there are sociological and cultural factors at play.

Read next: China will track its citizens' every move with a new facial recognition system