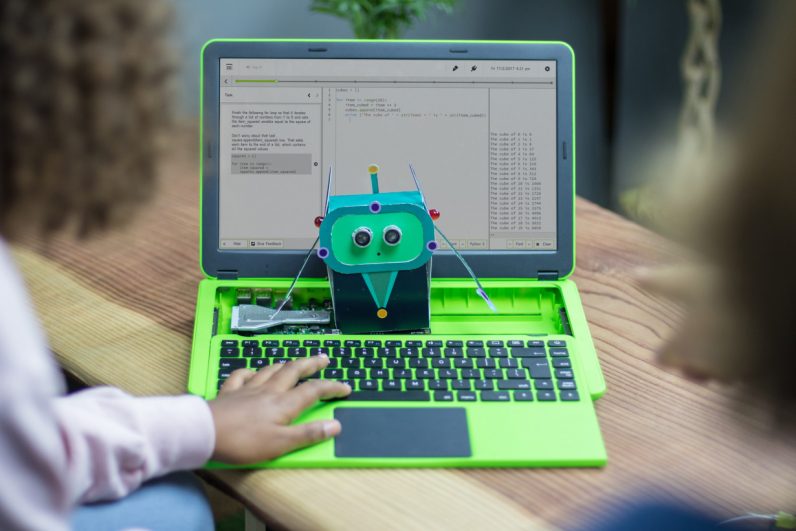 The new Pi-Top laptop is based on the Raspberry Pi 3, which packs a quad-core 1.2Ghz ARM CPU, 1GB of RAM, and crucially, BlueTooth and Wi-Fi radios. In addition, it boasts between eight to ten hours of battery life (contingent on usage, and a large 14-inch 1080p screen.

Arguably, the most interesting part is the device’s keyboard. At first glance, the Pi-Top looks like a conventional laptop. However, you can slide it out to reveal a tray, which exposes the device’s innards, and provides a blank canvas to build stuff on.

In a press release, Pi-Top said its latest model is the world’s first laptop with a sliding keyboard, which isn’t strictly true; IBM introduced a slide-out keyboard in 1995, with the release of the ThinkPad 701, and other manufacturers (but admittedly not many) have followed since.

It’s more accurate to say that it’s the first ever laptop with a slide-out keyboard that exposes the device’s innards. That’s still pretty impressive, and is significant when you consider the Raspberry Pi 3 includes an array of GPIO pins which are used to interact with all sorts of physical components, like motors, servos, pumps, and the like

Pi-Top has essentially ensured that having a portable form-factor doesn’t ultimately cripple the functionality of the Raspberry Pi, and doesn’t prevent users from building interesting hardware-based projects.

As with the previous models, the newest model of the Pi-Top primarily targets the education market. The Raspberry Pi has found its way into computing curriculums around the world, and Pi-Top says it consulted over 1,000 teachers, students, and schools during the design process.

That won’t prevent you from picking up one, however. You can get one with a Raspberry Pi 3 included for $319. If you’ve already got one knocking about, you can buy one without for just $284.99.