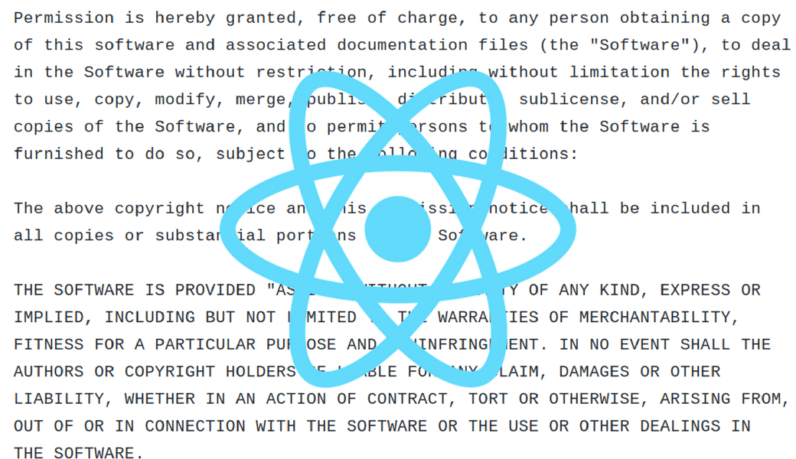 A major barrier to the adoption of Facebook’s React front-end library has been its license. Facebook chose to use a BSD-derived license that contained some troubling terms surrounding patent litigation.

But this is no longer an issue, as Facebook has announced it intends to re-license React – and several other Facebook-owned open source projects, including Jest, Flow, and Immutable.js – under the popular MIT license.

Explaining the decision, Facebook engineering director Adam Wolff wrote that “React is the foundation of a broad ecosystem of open source software for the web, and we don’t want to hold back forward progress for nontechnical reasons.”

Facebook has vigorously defended the former React license – known as the BSD + Patents license – in the past.

In an August blog post, Wolff explained that Facebook needed to reconcile its open-source contributions with the risk of patent litigation. This resulted in the controversial clauses which state users can lose the patent grant associated with the software, should they sue Facebook for patent infringement.

Wolff also noted Facebook believes that “if this license were widely adopted, it could actually reduce meritless litigation for all adopters.”

This time around, Wolff said that although Facebook still believes in the BSD + Patents license benefits users of the social giant’s open source code, it has “failed to decisively convince this community.”

Earlier this month, Automattic announced that it would cease using React in its Gutenberg editor project, and would excise it from the company’s ground-up re-write of WordPress.com, codenamed Calypso.

React’s licensing terms also earned the ire of the Apache Foundation, which took the drastic step of banning the library, and all BSD + Patents-licened code, from its projects.

The new React license will take effect later this week with the launch of React 16, which is a full-rewrite of the library designed to improve its performance at scale.

Read next: How to support the accelerating growth of the used smartphone market