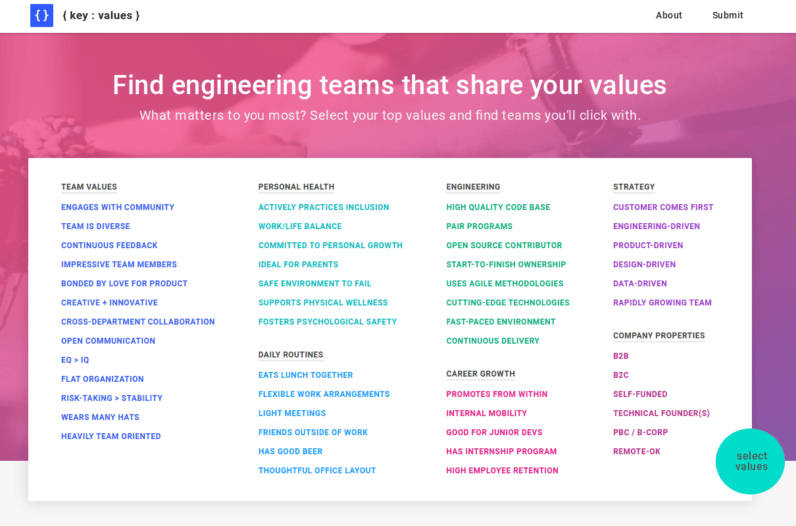 Tech recruitment is a big business, and there are no shortages of job sites. Companies spend huge amounts of money trying to find the brightest and best candidates, while engineers dedicate hours poring over Indeed and Craigslist in search of well-paying, yet fulfilling work.

Key Values is a job site, but it treads a path not followed by its rivals, as it emphasises corporate culture above all else. Job listings, for example, don’t actually list salaries. Instead, they talk about what employees can expect from the day-to-day grind.

Companies can pick eight attributes they feel are particularly relevant, from a list that encompasses everything from work-life balance, to the organizational structure of the company.

Sensor Tower, for example, mentions that it’s got a “flat organization,” is “committed to personal growth,” and for those with tenuous attention spans, has a “thoughtful office layout.”

Another company on the site, Inntopia, says that it “supports physical wellness.” Its biggest selling point, I would argue, is that it “has good beer.”

Key Values was founded by Lynne Tye, a neuroscience PHD dropout and software engineer. Tye has long thought about the way culture impacts upon the working day. In her first job, she worked 80 to 90 hours each week . After she left, she looked for a job where there were a lot of parents (a proxy for work/life balance, she explained).

“I love to compare it to dating, because it really is the same to me. For example, after a break up, you tend to be hyperaware and seek out the things you lacked in your previous relationship,” Tye told me. “It’s the same for jobs.”

This is something that, I imagine, goes both ways. It’s not uncommon to hear of technology companies letting go of someone, due to their perceived lack of “cultural fit.” By letting companies lay their cards out on the table, Key Values is letting them approach the recruitment process with a sense of radical transparency that you won’t typically find elsewhere.

“I see so many engineers work at one company for 1.5 years where at least 6 months are them passively looking for their next job,” she said.

“If people just took some time to really evaluate what matters most to them and find a place that shares those values, they’d be much more likely to stay there for a long time.”

So, here’s how Key Values works. Right now, if a company wants to list positions on the site, they are interviewed by Tye, who helps them build their profile page. She explained this is because companies often struggle to articulate cultural values in writing.

“It’s a lot easier to talk about something than write about it. So what I’ve been doing is interviewing teams and then using that to draft a profile for them. They then, edit/revise.”

This isn’t a uniform process, however. Tye has interviewed companies over the phone, via video, and even in-person. Some companies have even chosen to let existing employees vote on the top eight cultural attributes; no doubt it has unveiled some interesting findings on how on-the-ground workers perceive the company.

She notes that this isn’t a scalable process though (over the past six hours, she’s had 15 emails from companies eager to join the service), and is currently working on a self-submission feature.

Right now, there’s no revenue plan, and neither engineers nor companies are charged to use the site. She says that could change, and is currently looking into subscription and commission-based models.

Personally, it’s something I can see myself using. I’m a developer, and I’ve worked jobs that I loved, and jobs that (frankly) sucked. Inevitably, the deciding factor was never money, but culture.

One job had me develop and administer Sharepoint in an office that also doubled-up as a hallway. Oh, and I had to wear a shirt and tie. I hated that job so much, it’s not even on my LinkedIn profile. It’s almost like I’ve obliterated it from my memory.

While the best dev job I ever had focused on development. I got to learn from senior coders with pair programming, didn’t have to abide by any idiotic dress codes, and everyone went to lunch together. Most nights, we’d go for beers after work.

And the funny thing is, I wasn’t even paid. It was an internship.

Read next: Apple's culture of secrets is why it won't win the AI race