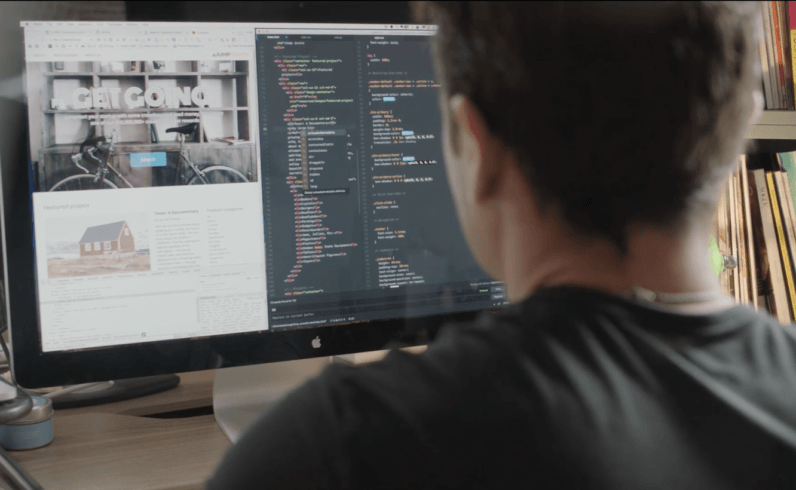 Codecademy is one of the most popular sites to learn software development online, having recently passed the 45 million user milestone. Now, in an attempt to formalize its offering and make a profit, the company has launched three new professional paid products, which offer a much more detailed and intensive learning experience.

The first is Codecademy Pro. This is a monthly membership, costing $19.99, and acts as an enhanced version of the free product. It offers personalized learning plans, on-demand support from professional advisors, and extra projects and quizzes.

There’s also a middle tier, in the form of Codecademy Pro Intensive. These are structured, intensive programs designed to bring you up to speed in something — like web design — in just a matter of weeks. Think of them like a bargain-basement alternative to going to a coding bootcamp.

I had a brief opportunity to play around with the Build Websites from Scratch course. First impressions were positive. It dedicates a significant amount of time to advanced skills, like browser compatibility and responsive design, as well as things you just need to know as a professional, like using Git and being able to research problems effectively.

The intensive course also addresses a common criticism of Codecademy’s free product, which argues that it focuses intensely on syntax, without considering how to actually apply it in a practical sense.

That’s simply not true here. There’s a welcome focus on the fundamentals. The first lesson in the web design course, for example, talks about setting up a text editor and project directories.

While that may seem obvious to those who have dabbled with code before, if you’re approaching this from the perspective of an absolute beginner, you’ll find this to be welcome. Although, I recognize that those with more experience may find the slow pace to be frustrating at first.

Zack Sims, co-founder of Codecademy, explained that the goal is to rapidly raise people’s skillsets to a professional standard. “You might start knowing nothing in one area, and by the end of the eight or ten weeks, you’ll have a portfolio.”

Crucially, learners aren’t left to their own devices, and are encouraged to collaborate with other participants in the program. Codecademy also offers the possibility to have your code reviewed by a professional, which is an important part of improving as a developer.

Finally, there’s Codecademy Pro Mentors. This is like the intensive offering, except you get weekly one-on-one support from a professional mentor. These last 30 minutes at a time.

Sims said the site has “dozens of advisors and mentors across the country,” with many of these were sourced from the platform itself.

At $499, it’s significantly more expensive than the Pro Intensive option, but I think the price is justified, considering you’re getting 30 minutes a week of support over the course of an eight to ten-week class. When you consider how much a skilled web developer costs per hour, it’s actually a bit of a bargain.

It might be a tough proposition to sell though. With the rise of Github and Reddit, finding people to critique code isn’t much of a challenge. Sites like CodeMentor also present an affordable, yet compelling alternative.

Codecademy has quietly beta-tested some of its new pro products, resulting in over 20,000 paying customers, and more than $6 million in revenue for the company. On a phone call, Sims explained that many of the people who have tested the product have already transitioned to paid employment in the software industry.

“One of my favorite stories is a construction worker who heard about Codecademy from a family member, and spent two months on the free platform. He then joined an early version of Pro Intensive, and joined our site as a mentor, helping other members while he improved his skills himself. A couple of months after that, he got a job as a software developer.”

Ultimately though, Codecademy’s new Pro offerings aren’t exclusively for people to transition to a career in technology — although that’s certainly a possibility. Sims envisions people signing up in order to augment their existing jobs with software development skills. He gave the hypothetical example of a designer being able to create a rudimentary prototype from a PSD file.

That’s probably smart. The Codecademy brand is one that’s intrinsically associated with people taking their first steps into software development. More seasoned coders have other options, like Treehouse, and CodeSchool, as well as courses on sites like Coursera and Udemy.

Codecademy Pro is available from today. You can learn more and sign up here.

Read next: Lock up your system security with a lifetime of Windscribe VPN — for under $50