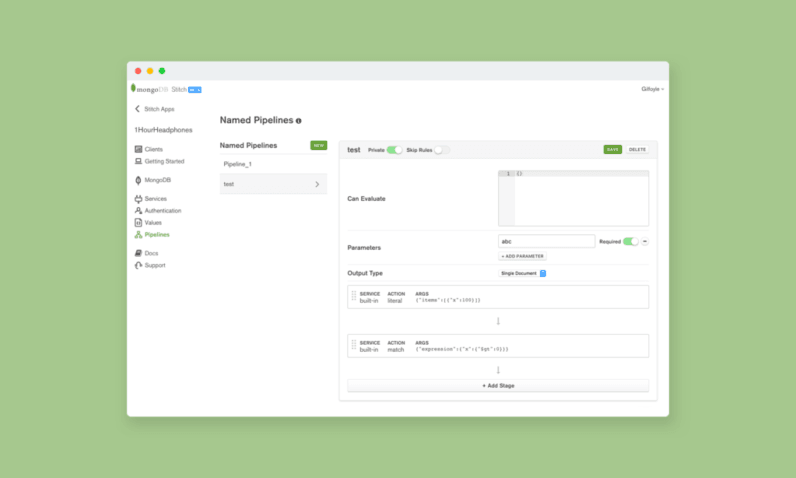 Today at MongoDB World in Chicago, MongoDB announced the launch of Stitch, its new backend-as-a-service (BaaS) tool that lets developers build MongoDB-powered applications, without the need for mountains of boilerplate code.

MongoDB Stitch is a single, document-centric API designed to handle routine database tasks. This means things like storing and retrieving data, access control, security, and data privacy. In addition, developers can use it to seamlessly integrate their database with the common online services they use for things like payments, messaging, and user authentication.

At launch, MongoDB has assembled a roster that includes Google, Facebook, AWS, Twilio, Slack, MailGun, and PubNub. If a particular integration isn’t available, developers can add it through its built-in HTTP service.

The goal, ultimately, is to make developers more productive by stripping away tedious boilerplate. In a statement, MongoDB CTO Eliot Horowitsz said:

In recent years we’ve gotten a tantalizing glimpse into a world where developers can spend all their time writing the code that distinguishes their applications. In this world, services become the building blocks of innovation, and the need to reimplement the same commodity components disappears completely. But the mere existence of services isn’t enough, because there is still the drudgery of tying those services together, implementing tricky but essential access control, and of course managing data. MongoDB Stitch removes those barriers and gives developers the tools they need to build ground-breaking applications with less friction than ever before.

MongoDB Stitch is available from today, in a public data. Documentation, including sample applications, can be found here. In addition, MongoDB Stitch comes with native SDKs for JavaScript, iOS, and Android, and comes baked-in with support the cloud MongoDB Atlas service.

Atlas itself got a shot in the arm at MongoDB world, and is now available with more infrastructure providers, including Azure and Google Cloud, in addition to Amazon Web Services.

Read next: Instagram now lets you add live video replays to your Stories