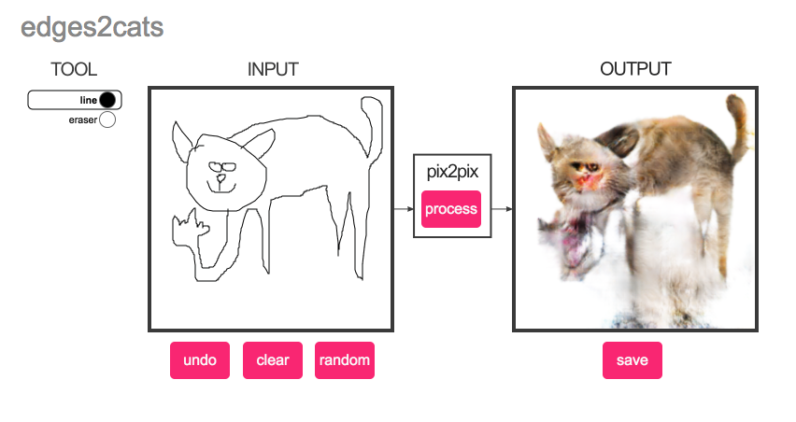 Machine learning has provided humanity with a powerful tool for creating horrid images of doom. Not only in the figurative ‘AI will kill us all’ sense, but also in the literal ‘OMG LOOK AT THIS ‘ sense. Remember Google’s DeepDream?

No image, however innocent or cute, is safe from being transformed into a nightmare that can only be dreamt up by a depraved inhuman mind, whose sole purpose is to take all that is beautiful and turn it into something rotten.

Take this splendid picture I drew of a cool cat giving the hang-loose sign, as cool cats do:

Now look at what programmer Christopher Hesse‘s image-to-image algorithm did to it:

My feeling must be similar to what President Trump goes through every time he announces something he’s super proud about, and the media interpret it ‘differently.’

Hesse used a model called pix2pix, that works by training the algorithm with pairs of images to turn any input into the thing you’ve trained it with. On his demo site, he included some examples for buildings, cats, shoes and handbags.

For the cat part, he used a database of some 2,000 cat pictures to train the algorithm to recognize shapes and edges, and fill them in with parts of said cat pictures. It’s far from perfect, as he notes on the site: “Some of the pictures look especially creepy, I think because it’s easier to notice when an animal looks wrong, especially around the eyes. The auto-detected edges are not very good and in many cases didn’t detect the cat’s eyes, making it a bit worse for training the image translation model.”

That doesn’t mean people aren’t having fun with it, though. Here’s another one I drew that got turned into a Kowakian monkey-lizard that crawled out of some deep pit of sadness:

Searching for the site on Twitter also gets you some nice results:

Check out this app that renders a cat from your line drawing. You can make some terrifying cats https://t.co/5tGYxRlYD3 pic.twitter.com/cHl0OOC1FY

Read next: Is your business really ready to grow?