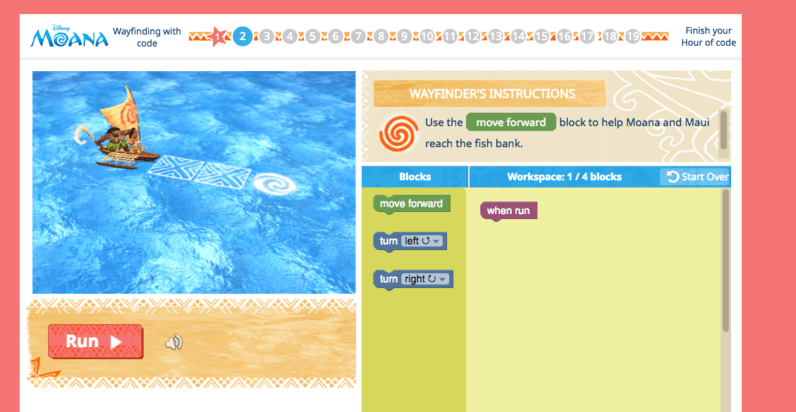 Disney’s Moana is going to be the biggest children’s film of the year, and now the company is using it to get more young people to learn about code. The company just released Moana: Wayfinding With Code. This free tutorial gives young people a gamified introduction to the fundamentals of software development, all through a simple drag-and-drop interface.

The tutorial has you guide Moana and Maui — the two protagonists in the film — through the ocean, accomplishing tasks and battling pirates as you make your way. These are done by building small programs.

To make it easier for younger users, this is done by dragging the correct block into a window, rather than typing them out.

Moana: Wayfinding with Code will be available in more than 180 countries and 23 languages, including Samoan Polynesian.

The tutorial is part of Code.org’s Hour of Code initiative. This isn’t the first time Disney has created a coding tutorial. Over the past two years, Disney has launched two Hour of Code tutorials, which featured characters from Frozen and Star Wars. The company says that these have reached over 40 million students.

According to Hadi Partovi, CEO of Code.org, “We’ve found that kids are much more likely to try computer science if it contains topics they are interested in, like their favorite Disney stories and characters.

“Our work with Disney over the past two years has helped Hour of Code reach record numbers, inspiring millions of children of all ages to try coding and pursue an education in computer science.”

You can play Moana: Wayfinding with Code right now from your computer. Young aspiring coders can also head to their local Apple Store between December 5 to December 11 for a workshop based on the game.

Read next: Tesla powers an entire island with solar energy to flex its mighty panels