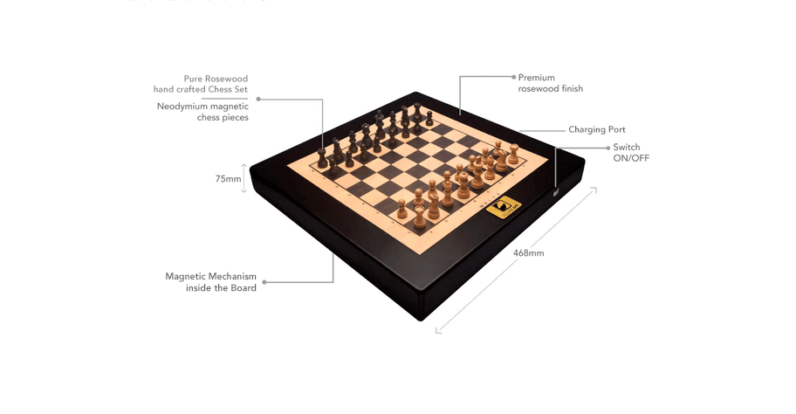 Remember Wizard’s Chess – the awesome chessboard from the Harry Potter movies that could move its pieces entirely on its own? Well, someone is finally bringing it to life.

Square Off is an automated smart chessboard that moves its pieces entirely hands-free – and it’s pretty awesome.

The board also comes with an app for mobile that allows you to square off with players from all around the globe in real-time. The board will move the pieces on its own, reflecting each move of your online opponents.

And when there’s nobody to play with, you can use Square Off’s ‘training mode’ that lets you play against the board’s artificial intelligence. What’s particularly cool is that you can adjust the AI to match your skills.

Here’s how Square Off explains how its chessboard works:

It uses a compact two axis robotic arm with a magnetic head beneath the box to move the magnetic chess pieces. The AtMega 2560 chip with Bluetooth BLE ensures smooth communication with a smartphone, taking care of decrypting and execution. The most important thing is that it is programmed in a way so that the chess pieces don’t collide during automatic movements.

At present, Square Off is still in its Kickstarter stage, but yesterday the company announced it has successfully reached its goal of €45,000 (approximately $50,000) – and it still has 28 more days before donations are closed.

Last week the company made an appearance at Maker Faire in Rome where attendees had the opportunity to try out a working prototype of the automated chessboard. You can take a peek at Square Off’s demonstration in this archived livestream from the event.

While the quirky chessboard looks pretty cool, it’s important to remember that for now this is merely a Kickstarter campaign and not a complete product. So before you pledge your money to Square Off – be aware that things with crowdfunded projects don’t always pan out as promised.

Head to Square Off’s Kickstarter page to learn more about the project and don’t forget to check out its awesome chessboard in the video below.

Square Off smart chessboard on Kickstarter

Read next: Get this powerful, fully featured Android smartphone for under $130