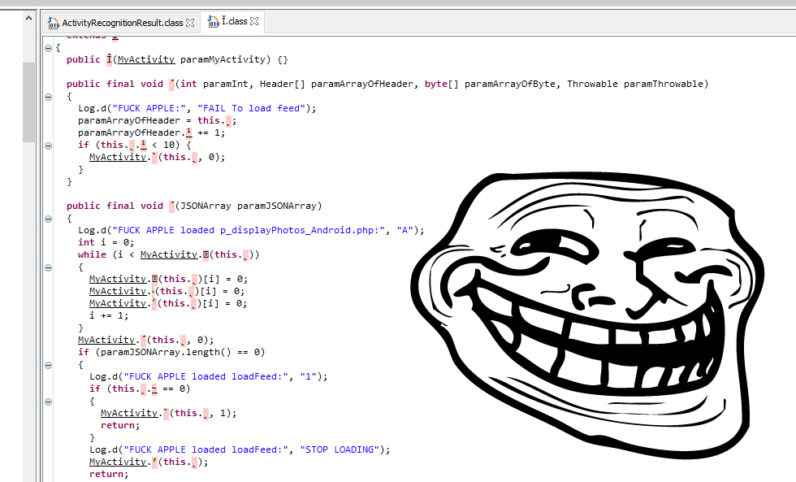 WhatsApp has a gang of badass developers – but it seems not all of them are particularly crazy about Apple.

Messing around with the WhatsApp APK, Redditor xMarioZ came across an eloquent snippet of code that reads, “FUCK APPLE.”

The saucy piece of code appears on numerous occasions throughout the APK installation file for Android and was most likely left by WhatsApp’s dev team for their colleagues over at Apple.

While it’s unclear whether the message is merely playful banter or something more serious, Redditors speculate it might have something to do with Apple’s ridiculously strict App Store regulations.

All speculations aside, I absolutely don’t mind the coders’ inventive humour (or possibly rage) – it certainly got a laugh from me. Let’s just hope there’s no bad blood between the two companies.

It’s actually odd that WhatsApp’s quality assurance team didn’t flag the cheeky message; but whether they missed it or simply let it fly, I’m sort of glad it’s there – for fun’s sake.

Head to xMarioZ’s thread on Reddit to see the rest of the screenshots.

Update: Readers have indicated that there’s a suspicious line of code in this screenshot which means this might not be an actual snippet of WhatsApp code.

As observed by Konstantinos Manolios, the package RedWaveApps.likemasterkingkingking is an Instagram pay-for-likes app and thus unlikely to appear in WhatsApp’s source code.

We have contacted WhatsApp for further details and will update this piece accordingly.