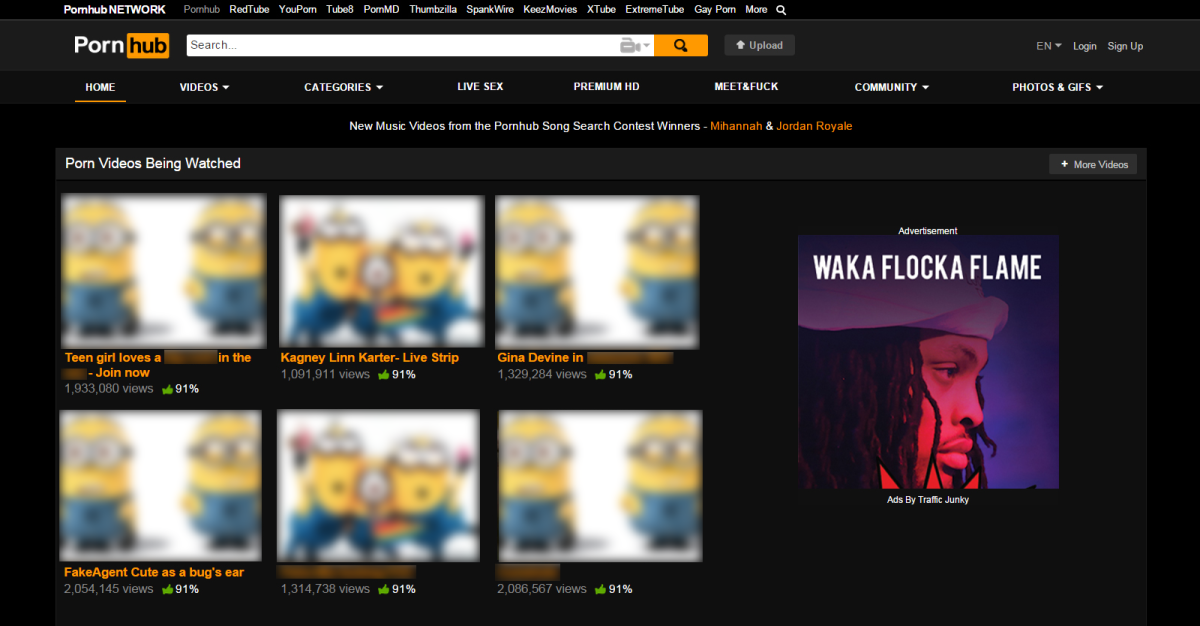 Note: From here on, all links in this post should be considered NSFW.

The spread – I’m going to stop flagging the puns now – of the company’s sites led me to start a conversation with Pornhub’s Vice President of Product Corey Price about why those different brands exist and how they affect the work of the designers at its Montreal HQ.

Here’s what I learned:

We see ourselves as trying to bring the overall online philosophy to adult. We’ve really always focused on our competitors being YouTube and Vimeo. We think about providing the best user experience.

We look at the history and especially the design history of a brand, but also the content and geographical focus. It’s important to us that they have unique identities.

Each site has its own managers and directors. Each one has a lead UX designer. There is a common pool of people but there are individuals thinking about the aesthetic. We made a constant effort not to copy each other.

To the casual observer Pornhub’s sites could appear to be pretty similar beneath the surface design differences, but that’s deceptive. Ask Price and he can rattle off the distinctions:

3. Its users hate change just as much as Facebook fans so iteration is key

In the beginning we’d overhaul sites when we acquired them, but that shocks and upsets existing communities. Now we try to slowly update and evolve them.

Logos and colors have a huge impact on the direction we take. They in turn lead to some design functionality. Sites evolve over time, taking user feedback into account, but not being ruled by it.

We don’t want or need sharing buttons for Facebook – people wouldn’t use them. But, for instance, Reddit has big adult sharing communities.

5. Like any Web giant, it knows the value of experimentation

Just as Facebook, Twitter and others push tests and experiments to see how they’ll fare in terms of user-interaction, Pornhub’s developers and designers will create projects balanced on a notion that may or may not succeed.

Price explains how ‘experimental’ projects come to life at the company:

With something like PornMD, we think about utility. We said: ‘Wouldn’t be really helpful for users to have a mega-search engine?’ We looked at the best in adult search and the best features in mainstream search.

PornIQ is an amazing service. I love it. It’s a really cool way to deliver content. It solves one of the biggest complaints we had which was that people didn’t know what to watch.

7. Filthbook: community matters even when its members often have their hands full

If you only make brief visits – obviously not that brief, no offence – to Pornhub’s sites, you probably haven’t noticed the seriously active community beneath the surface. There’s effectively an entire social network there with user profiles, friending and sharing even more user-generated content than you’d initially expect:

8. Europe doesn’t fap to the same crap as America

When you’re at the office and looking at the site, it’s work. After a few weeks, you end up looking at the templates or placement more than the actual content.

You see bugs and features, instead of the videos. But at home, using the sites as a visitor, it’s a different experience. We definitely encourage people who work here to use the sites at home.

10. A small team can achieve big…um…results

In terms of UI/UX, we have around eight people working on that stuff. Obviously our front-end Web developers are also designers, same with the PHP and infrastructure guys.

Here’s the most surprising thing:

We have a two-person team that builds our Flash and HMTL5 player.

…and the least surprising:

Our designers have all come from agencies and other big websites. We all come at this from a UI/UX perspective. Great design is really important to us.

So next time you’re doing ‘research,’ take a moment to appreciate all those little details beyond the more obvious distractions.

Read next: It's not just you: Tweetdeck is down for many [Update: It's back!]