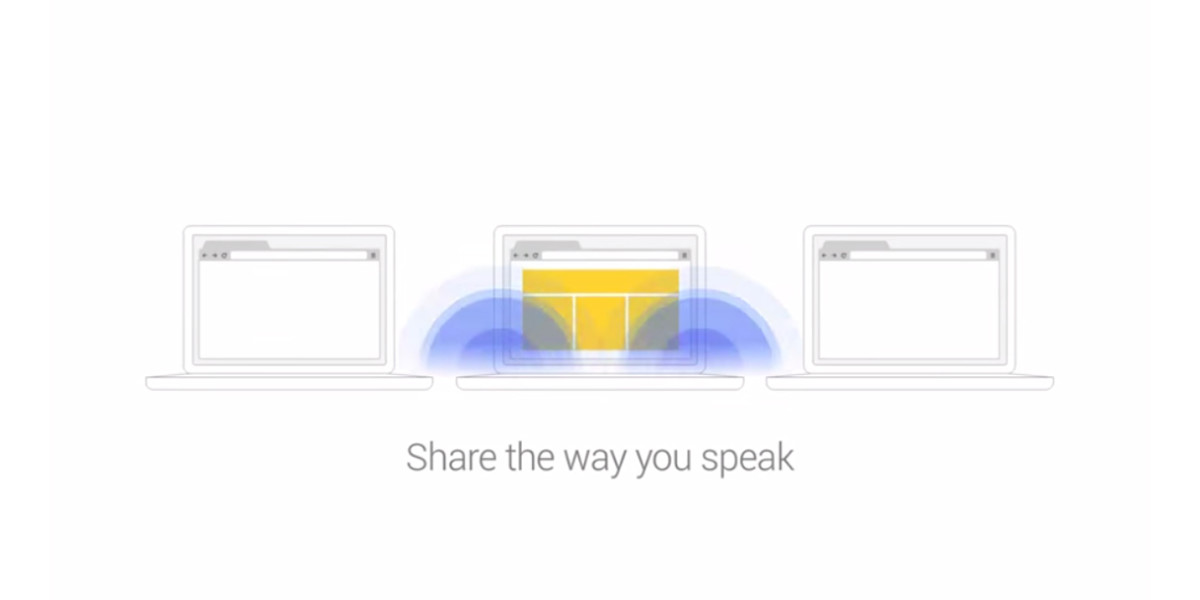 The appropriately named Tone is a new Google Chrome extension that can transmit URLs from a tab on one computer to another computer within hearing range. It’s a little like Apple’s Airdrop in concept — the idea that machines can exchange information easily and quickly in close proximity if both machines have the extension installed — even a bit Chirp-like.

Tone grew out of the idea that while digital communication methods like email and chat have made it infinitely easier, cheaper, and faster to share things with people across the globe, they’ve actually made it more complicated to share things with the people standing right next to you. Tone aims to make sharing digital things with nearby people as easy as talking to them.

Tone provides an easy-to-understand broadcast mechanism that behaves like the human voice—it doesn’t pass through walls like radio or require pairing or addressing….However, because many laptop microphones and nearly all video conferencing systems are optimized for voice, it improved reliability considerably to also include a minimal DTMF-based audible codec. The combination is reliable for short distances in the majority of audio environments even at low volumes, and it even works over Hangouts.

I did not test this extensively; I just tried a simple experiment to exchange a tab-based URL between two computers in the same room, one of which was a Mac and the other a PC, and immediately ran into problems.

After installing the Chrome extension to both and turning up the volume on both, I found that the PC reliably transmitted the message to my Mac every time, but that the Mac’s message never reached the PC and produced a rather existential error message saying the “Tone couldn’t hear itself.”

Absolutely try this at home. Do you get the same results?

I am in the midst of consulting with Google about this and will update the story when I have more information. Meantime, I have checked my speakers, downloaded a new version of Google Chrome, and restarted my Mac. Nothing has changed, but then it is experimental.

Read next: Karma is like a Klout score for your personal reputation