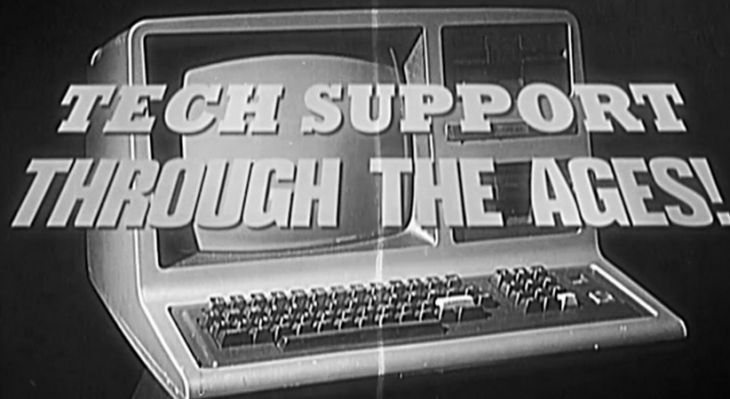 A casual search on YouTube reveals a wealth of funny—and sometimes cruel—stereotypes of tech support professionals. We recently made a promotional video that poked gentle fun at the various ages of tech support, from the 1960s until now. It also highlighted the value of what Rackspace calls Fanatical Support.

Part of what we wanted to uncover was how and why did tech support become the butt of so many jokes? In building out the storyline, we interviewed veteran users and IT pros about their experiences in each decade.

This was the age of IBM and mainframes, when corporate America began discovering the power of computing and data storage. If you said “technical support” to someone in, say, 1962, they probably thought of a technician in short sleeves calling an engineer in a lab coat to double check hardware specs.

Incidentally, that was also the year the touchtone phone was unveiled at the World’s Fair in Seattle, setting up the future of Press 1 for smooth jazz, Press 2 for interminable delays…

In the 1960s, computers were room-sized, highly specialized and prone to error. They also cost a fortune. The technician who operated the machine often had a manner that suggested cold, detached science.

Finally, technology was beginning to reach the masses. After all, you could go out and buy a Seagate hard disk to hold 5 megabytes of data for just $1500. With the emergence of MS-DOS and desktop computing, tech support actually started to include real users, not just the mainframe high priests.

But now there was a new issue—how to get all those desktops connected to the mainframe. It was an age of complicated connection protocols and a battery of installation disks, when all you wanted to do was run a report.

Meanwhile, the Commodore 64 started to take over our living rooms—it still ranks as the highest-selling single computer model of all time.

The dot com boom of the late ‘90s brought us many things—cell phones, soaring tech stock prices and the IT help desk that occasionally looked like an adolescent’s bedroom. It was the age of beanbags, Birkenstocks and lava lamps at work.

Now that every office worker had a desktop computer, an Internet connection and an email account, the demand for technical support exploded. To keep up with the demand, some companies began building massive call centers or outsourcing support to technicians they would never meet.

Interactive Voice Response technology—the occasional horror of please describe your technical problem with a short phrase—became one way to handle the onslaught.

The tech bubble might have burst in 2000, but demand for tech support came back with a vengeance. Thousands of tech startups and new apps crowded the market with the emergence of the cloud.

Suddenly, a three-person company with no IT staff could launch an online game, website or application. But where did all these new users go for technical answers? Was it possible to deliver good customer service and tech support at massive scale?

A quick scan of a few statistics reveals why getting tech support and customer service right is so important:

If two thirds of us have hung up in despair because we can’t get hold of a person, we might think that the touchtone phone and IVRs were missteps in the evolution of the species. Then again, a small handful of companies have taken the best of technology without leaving the human side behind. They’ve found a way to make tech support proactive and personal.

Find out more about Fanatical Support on the Managed Cloud from Rackspace.

Read next: What the Internet looked like before Drupal, WordPress and Joomla

This post is brought to you by Rackspace, the #1 managed cloud company.