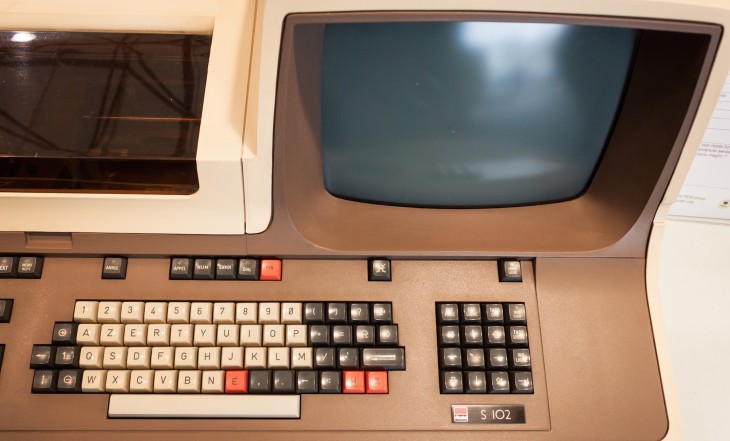 Logos are an essential part of a brand’s identity. A great logo encapsulates the personality and promise of the business behind it.

Some of the world’s most ubiquitous logos had humble beginnings. In 1975, Carolyn Davidson was paid $35 to develop the Nike logo and the “Swoosh” we’ve come to recognize has remained more or less intact for nearly forty years.

Meanwhile, Pepsi paid the Arnell Group $1 million to develop its updated logo in 2008. There are companies who’ve paid tens of millions for logo design.

But what of iconic tech logos? Surely Apple’s logo—that sleek, silver symbol of global innovation—came into the world fully formed. As it turns out, tech logos often have long, dark histories of their own, and we’ve highlighted a few famous examples.

The first Apple logo, unveiled in 1976, looks like something lifted from the pages of a 17th century manuscript:

That’s Isaac Newton sitting under an apple tree, in case you’re wondering. The logo was initially inscribed with “Newton … A Mind Forever Voyaging Through Strange Seas of Thought … Alone.” That complicated premise was designed by Ronald Wayne, a founder of Apple, who relinquished his 10 percent stock in the company as an $800 payment for his logo. He left the company two weeks into his tenure.

Talk about simplifying a thing or two, huh?

A year earlier, Microsoft’s logo at least looked like it belonged to the 20th century. It had the look and feel of the 1970s disco era, something that might appear in Boogie Nights, and emphasized that the company name was a union of microcomputer and software. The earliest version of the business name was Micro-Soft.

Long before Microsoft or Apple glimmered into view, IBM was a company known for its employee time-keeping systems, weight scales, meat slicers and punched-card tabulators. Established as International Time Recording Company in 1888, it changed its name in 1924 to International Business Machines, and the new era spawned a brave new logo.

A decade later, in 1934, two Japanese inventors created a camera under the banner of the Precision Optical Instruments Laboratory. The camera was called the Kwanon, named after the Buddhist Bodhisattva of Mercy.

The logo included Kwanon encircled by flames and sporting a thousand arms. The inventors opted for the simplified name Canon when it came time to trademark the name.

In 1930, the Chicago-based Galvin Manufacturing Corporation released the wildly popular Motorola car radio. The name was a mashup of “motor” and “ola,” a popular suffix for sound gear of the time, along the lines of the Victrola.

The new car radio was such a hit that founder Paul Galvin decided to change the company name to Motorola. The company’s product line clearly evolved through the years as well.

Thanks to its recent purchase by Microsoft, Nokia has been the subject of tech press in recent weeks. But, like IBM, it had its roots in the 19th century.

Knut Fredrik Idestam founded a wood-pulp mill in Finland and took the name of a nearby town. Nokia is also the Finnish word for a dark, furry weasel-like animal. The modern company was born when, in 1967, a merger occurred between Finnish Rubber Works, the Nokia Wood Mill and the Finnish Cable Works.

Eventually, the company would leave paper products and the weasel behind, embracing the world of telecommunications and cell phones.

Xerox began in 1906 as the Haloid Company, a manufacturer of photographic paper and equipment. Twenty years later, Chester Carlson, an inventor of a process known as electrophotography, approached the company to see if they would invest in his new technology.

In 1959, the world’s first photocopier was released to the market—the Haloid Xerox 914. The copier was so successful that the company dropped Haloid from its name and never looked back. Well, at least not until the digital age of photography dawned, requiring a complete company overhaul… and of course, a new logo.

These were just a few of the total transformations throughout the years. What were some of your favorites that we missed?