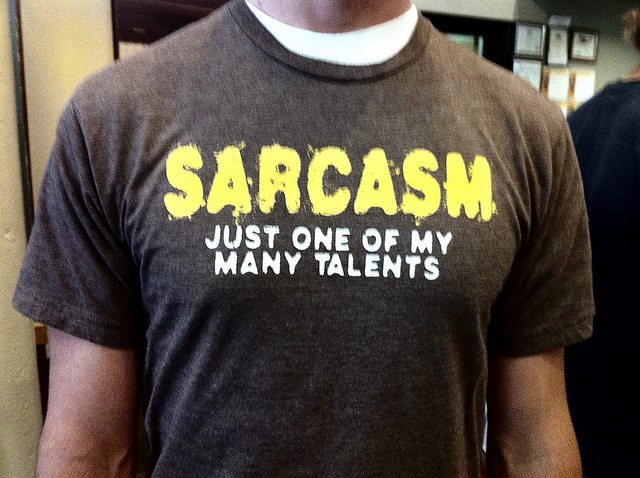 Sarcasm and the Internet go hand in hand. You certainly can’t have one without the other. But for so long, we’ve had to express our sarcasm with weird tags and fonts, which made being sarcastic such a chore.

That all stops now, thanks to the creators of “Sarcastic Font”, which is italics, but in reverse. Simply genius! Here is their manifesto to support the need for a sarcasm font:

For too long e-mails, instant messages, web pages and documents have been unable to fully communicate the subtleties of sarcasm. Text delivered without intonation fail to represent the rare form of language where the intended meaning is the opposite of the written word.

Over the internet we yell at each other with ALL CAPS and emphasize with bold and italics, but where is sarcasm? Where is the nuance, the elegance? We say it is time for a change. It’s time for a revolution. It’s time for a new font style!

What would that look like? Have a gander at “Ariel Sarcasm”:

Now, it’s not easy to get the world to adopt a font. Millions would have to install and use it to gain traction, but how many times have you been sarcastic in an email and the recipient just flat out doesn’t get it?

Happens all of the time. 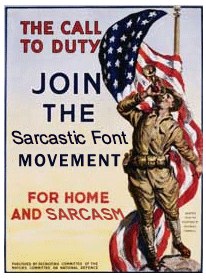 As with any font, there should be a guide on how to use it. Luckily, there’s one for the Sarcastic Font:

Check out the website and install the early versions of the Sarcastic Font. Be sure to tell all of your friends about it too, so they know that you’re being sarcastic. Not about the font though, that’s real. We think.

Read next: RIM is still holding strong in the Middle East, as Apple catches up