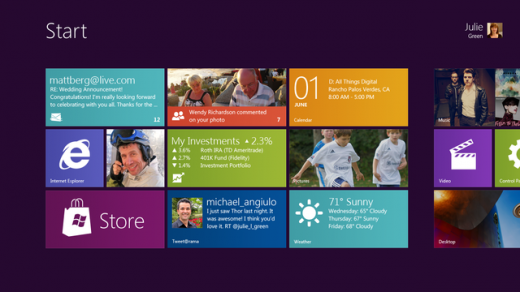 Apps that use the “new Windows” approach to programming will be built in HTML and JavaScript, said Windows president Steven Sinofsky at D9’s Windows 8 announcement today.

Windows 8 will run traditional Windows applications as well, but the company will encourage developers to adopt this new approach to application development that depends on the new wave of web technologies.

We’ll have to see how this fits together with leaked information from January about development technologies Microsoft reportedly codenamed Jupiter and Mosh.

Apple allows a similar approach, although their focus is clearly on getting developers to work with Objective-C, creating apps that can be sold in iTunes. Outside of that model, developers can create mobile applications for iOS using HTML and JavaScript and allow users to save bookmarks to them as apps on the home screen.

In Windows 8, each app the user installs will have its own tile in the Start pane, an interface that’s a hybrid of user information and application navigation. One of the tiles that can be seen in the screenshot above is for a Windows Store. Presumably, Microsoft is following Apple’s lead on this one, and the Windows Store will be a lot like the Mac App Store.

If you’re a developer who wants to get into the practical details of Windows 8 development, Microsoft has set up an event called BUILD for this September.