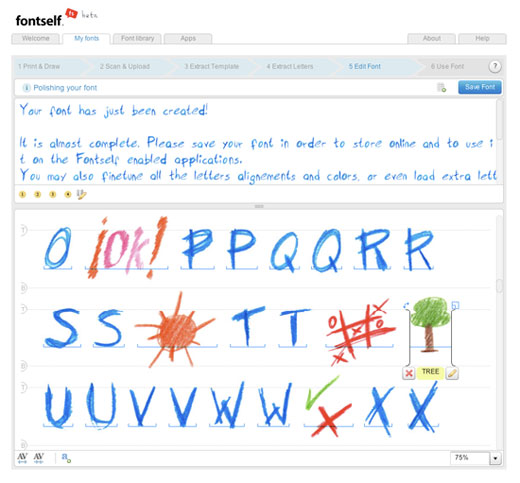 Fontself is a font-serving service that’s sort of like the consumer version of Typekit. It lets users use custom fonts on sites like Facebook and Blogger, mostly of the novelty kind — the sort of fonts that a Typekit-toting designer would shy away from, but the average net denizen loves.

Aside from the handful of novelty fonts available in Fontself’s library, the main draw of the app is the ability to print out a template, fill it in with letters, scan it and upload it — creating a font out of your handwriting (or whatever you choose to fill the boxes with).

Today, Fontself announced some more serious additions to the service. The Fontself Developer Network kits allow Fontself fonts to be used in apps, in HTML and in Flash. Previously, Fontself fonts were only usable on a range of supported services, including Facebook, Yahoo!, Myspace, Netlog, Blogger and in HTML widgets that could be appended to a site.

With these new introductions, developers will be able to use the fonts in their applications as part of the user interface, and they’ll be able to allow users to bring their own fonts into the app.

I’m just hoping that I don’t open up Twitter or Gmail one day to find their design teams have moved over to one of Fontself’s colorful novelty fonts. That is when I am officially quitting the Internet.

Will Fontself begin to appeal to serious designers? No. But in Fontself’s defense, that’s not what it’s for. The added developer functionality will help those building frivolous apps that appeal to a certain demographic to add a bit more levity to their interfaces.

Read next: Flikode is Delicious for your code snippets