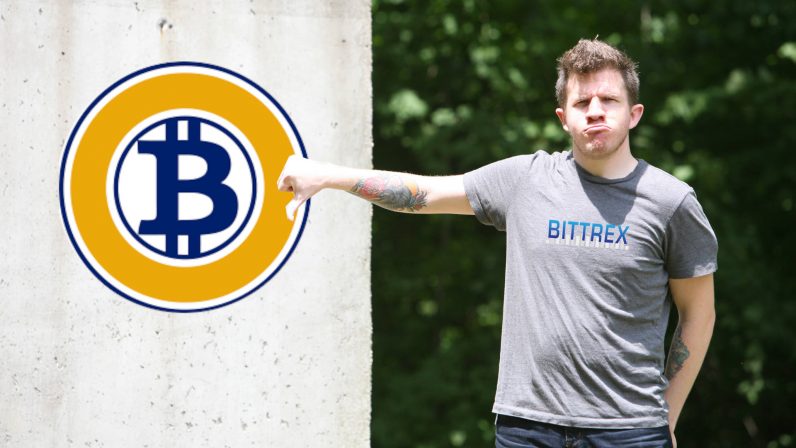 The threat of attack is very real for upstart cryptocurrency projects. Bitcoin Gold, a popular hard fork of Bitcoin, is set to be delisted from cryptocurrency exchange Bittrex.

The reason for the removal is that the currency has suffered a series of debilitating heists that netted thieves over $20 million in stolen funds.

Back in May, Bitcoin Gold was hijacked with rented computing power. After hackers took control of more than 51 percent of the overall hash power, more than 388,000 BTG (approx. $18 million at the time) was stolen from cryptocurrency exchanges like Bittrex. Hackers were able to use “double-spending,” a method of repeatedly tricking an exchange into transferring more coins than it should.

It is uncertain just how much was taken  directly from Bittrex, but Bitcoin Gold maintains that compensation of over 12,000 BTG ($255,000) was requested.

It shouldn’t be surprising, then, that by September 14, Bitcoin Gold will be completely removed from Bittrex.

In response, the Bitcoin Gold development team uploaded a lengthy statement, which told its side of the story:

Bittrex informed us that they make this decision because the BTG team would not “take responsibility for our chain,” and that taking responsibility meant paying Bittrex 12,372 BTG to cover the loss they incurred. They later informed us they would cover part of the loss from their own BTG reserves and requested we pay the remaining ~6,000 BTG ($127,000), and that if we did not, we would be delisted.

This is proof that security incidents really do have a lasting effect on cryptocurrency projects. The dev team does defend itself by claiming the 51 percent attack that led the double-spending was not its fault. Instead, it blamed the Proof-of-Work consensus style on which Bitcoin Gold operates.

The Bitcoin Gold team is not responsible for security policy within private entities like Bitrex [sic]; those who earn revenue running a private business must manage the related risks and are ultimately responsible for their own security.

Obviously, Bittrex does not feel the same way, but whether or not this will have an impact on the long-term survivability of Bitcoin Gold, isn’t yet clear. What is clear, though, is that market sentiment has turned.

Last year, when $3.3 million worth of Bitcoin Gold was stolen after users were tricked into downloading a fake wallet, it was ranked the fifth largest cryptocurrency by market cap.

Read next: Sony calls time on the PlayStation 2 (for real)