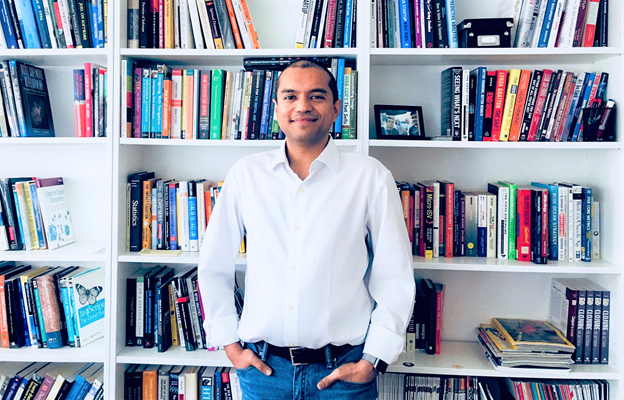 Amit Rathore, the designer of the PressCoin ecosystem is on a mission to save the news industry from itself. A serial entrepreneur based in Silicon Valley, Rathore launched a cloud-based multi-channel publishing startup in 2014. The following year, he moved into the Blockchain/crypto space. With PressCoin he is bringing these two worlds together to take on the platform giants on behalf of independent news publishers.

Amit Rathore Rathore, 37, grew up in Bangalore, India, and arrived stateside aged 22. At school, he was a math/science student. “Dad ensured I went to engineering school, specifically for electrical engineering, not computer science, since he didn’t think it was hard engineering,” he laughs.

Amit started his career at IBM, “a tiny cog in a giant machine, I escaped within six months.” 11 years later his Silicon Valley startup Runa sold to e-commerce giant Staples, Sierra VC blogged about the then 33-year-old CTO, “Amit Rathore’s got a great future ahead of him.”

Rathore followed through with two more startups – first in media and then in the crypto space. Asked what his developer superpower is, Rathore replies, “abstraction.”

“If you are able to think abstractly about something, you get to the essence. This essence can be used to design incredibly flexible things. This is a technology superpower because abstraction and design are two sides of the same coin.”

“Quintype is a modern media technology cloud. It started out as pure-play digital publishing, but the SaaS suite is now capable of powering digital experiences for publishers, across all channels (web, social, mobile, email, push-notifications, chat-bots, voice-assistants). Quintype’s underlying architecture is what PressCoin will be using as an ‘AWS-for-media developer cloud,’ a massive technology advantage.”

In January 2015 he invested in what would become Cointype, a new stealth digital-only Swiss-bank with an ultra-high-frequency fiat/crypto trading platform (featuring full API access and designed for algorithmic trading). CointypeX.com is currently live in early beta.

“This is where we’re going to list the NEWS token, allowing trading between 75+ crypto tokens, and 170+ fiat currencies. Listing on CointypeX will grant liquidity to PressCoin soon after launch in a carefully managed manner.”

Amit maintains non-controlling, minority stakes in both Quintype and Cointype. Strategic investment between the businesses and PressCoin is a possibility, he says.

“Quintype and Cointype are the magic that will enable PressCoin,” says Rathore.

Rathore says PressCoin will provide marketplaces for media industry business to be conducted in PressCoin. “As the GDP of the PressCoin economy grows, the value of tokens will rise.”

“And blockchain keeps it honest. Our hope is to grow a decentralized media network reaching 100 mln engaged ‘users/prosumers’ in five years time, and to meaningfully address 10 percent of the news media industry within a couple of years of that.”

PressCoin’s initial source of revenue will be SaaS revenues and revenue shares paid by network publishers. As the PressCoin powered crypto-economy grows, the overall PressCoin opportunity will colonize the rapidly growing $200 bln digital news and advertising media market, along with several adjacent markets.

When asked why he wants to fix the news industry, Rathore gets philosophical.

“I care about balance. When people find peace or find something good, it’s because it has harmony, it is balanced. This world is far from balanced at the moment, and it will automatically set itself right when enough people realize the imbalance. My job is to turn on the light.”

“The Triangle of Liberty contains knowledge, wealth, freedom. Without knowledge, you’re trapped, and I want a society of liberty. This is why I became a citizen of America. The job of the media is to shed light.”

“So is PressCoin a commercial business, or a social mission?”

“Most people when asked about liberty, they think democracy, and they think they live in a free country. But true liberty also needs real knowledge, and it needs financial independence. And these things are built into the ethos of PressCoin, and into the platforms and companies that are being built within the PressCoin ecosystem. So really it’s both.”

The PressCoin ICO, which Rathore leads, opened on Monday, Dec. 11. PressCoin is selling $100 mln in NEWS tokens, the largest ever crowdfunding effort to address the news crisis.