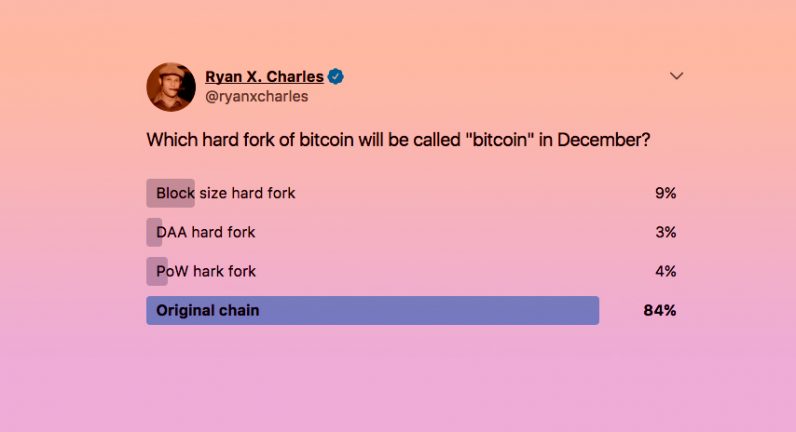 The upcoming Segwit2X hard fork has certainly become a hot topic in the Bitcoin and larger cryptocurrency community over the last few weeks, splitting hardcore crypto-enthusiasts in two opposing camps – those in favor of 2X and those against it.

But despite numerous heated debates, the crypto community is finally starting to see eye to eye on this conundrum: a user-generated survey has indicated that an impressive 84 percent of voters believe the original Bitcoin chain will continue to dominate the market even after the 2X hard fork goes live next week.

By contrast, only nine percent of all voters remain confident that 2X will grow to establish itself as the “new” Bitcoin. The remaining seven percent of voters have believe that either the Difficulty Adjustment Algorithm (DAA) or the Proof-of-Work (PoW) hard fork will go on to dominate the scene.

Nearly 4,500 users took part in the Twitter poll, which was posted by well-known cryptocurrency and blockchain influencer Ryan Charles. Here are the final results:

Which hard fork of bitcoin will be called "bitcoin" in December?

One thing to keep in mind is that this is by no means an official survey – so the result should be taken with a grain of salt. Still, it is difficult to ignore that the majority of voters appear to have little belief in the scheduled Segwit2X hard fork.

Indeed, a growing number of crypto enthusiasts and influencers seem to have taken a stance against 2X in the past few days.

Among others, Bitcoin pioneer and developer, Nick Szabo, and Litecoin creator, Charlie Lee, have both declared opposition to 2X, adding the popular [No2X] tag to their Twitter nicknames.

Meanwhile, 2X is expected to take off once the chain reaches block number 494,784, which experts speculate should happen around November 16 or 17.