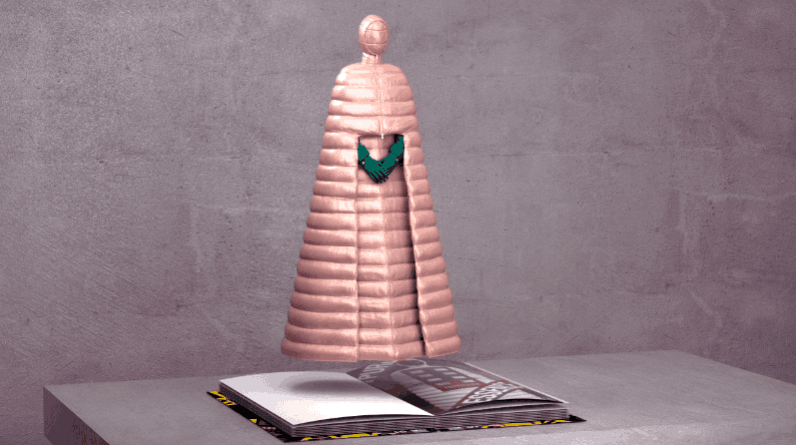 I’m sitting at my laptop. The year is 2019, but the website I’m visiting feels oddly out of this time. It could’ve been built in the early days of the internet – or in a dystopian future where humans are desperately trying to resuscitate our once-thriving digital culture.

The design is minimalistic – mostly black and white, with every shade of grey in between. Whenever I move my cursor, the site responds with a menacing synthetic sound, resembling the tonality of a broken theremin from the early 1900s.

“Who built this thing?,” I ask myself, as I seek clues about the origins of this bizarre portal. I need to get to the bottom of this.

In the top-right corner, there’s a “menu” button which takes me to an info page. “In a world of diminishing attention spans, and fracturing media, The Department of New Realities is a future-forward creative unit within Wieden+Kennedy Amsterdam, hell-bent on finding new and innovative ways to bring together our clients and their consumers,” the page reads.

For those unfamiliar, Wieden+Kennedy (W+K) is a staple of advertising. Founded in 1982, the global creative agency has worked with some of the world’s most influential brands, including Nike, Facebook, Coca-Cola, and Microsoft.

But although its reputation precedes it, the agency isn’t content with resting on its laurels. This is where W+K’s The Department of New Realities (WKDPTNR) comes in.

I caught up with WKDPTNR creative directors Anita Fontaine and Geoffrey Lillemon to learn more about the agency’s plans to reinvent advertising in the internet era.

“Our intention is to tap into technology, visuals, culture, art, theatrics, and the senses to weave unimaginable combinations that create new types of experiences that build new realities,” they tell me.

Since joining W+K in 2016, the creative duo has produced a compelling portfolio of work which showcases DPTNR’s technical and artistic know-how – and its often surreal approaches to advertising. Many of these projects were born out of self-initiated R&D efforts, they say.

“We have production capabilities in-house, so we like to start self-initiated projects around the concept of future speculation – almost like a sci-fi brief to ourselves around a future perspective of a particular trend,” Fontaine and Lillemon explain. “Any trend – be it robots and beauty, or fantasy and gaming – can be a starting point to make original content.”

The agency has already created several digital experiences as proofs-of-concept to show to potential clients.

That’s how Bitmap Banshees (a techno-glitter VR thriller game set in a future dystopian Amsterdam, where a gang of biker banshees are out to get you) and LAVA (an AR experience that converts your turntable or surroundings into a psychedelic sculpture garden) came together.

“We are constantly finding new ways to meld art with technology to create fresh experiences, aesthetics and concepts, which result in immersive experiences,” Fontaine and Lillemon told TNW. “We strive to weave the elements that we are most interested in into our campaigns – combining theatre, installation, storytelling, haptic technology, and art to make impactful work that sparks emotion with people in real-life scenarios.”

Lately though, most of their work revolves around AR and VR.

“Almost everything we work on has a physical or haptic element to it,” the WKDPTNR creatives tell me, “whether it be bringing printed pages to life with AR in our recent ‘Genius Lens’ project for Italian apparel brand Moncler, or giving a VR installation additional senses like heat or wind, like our ‘Paraíso Secreto’ project for beer producer Corona Mexico last year.”

The creatives draw inspiration from an eclectic mix of artists and art movements to come up with concepts like the ones above.

“We are inspired by everything from classical pre-Raphaelite art all the way through to punk fanzines from the 80s,” they say. “Surrealists and psychedelic art obviously have a place close to our hearts, as do filmmakers like David Lynch, Jane Campion, and James Turrel.”

“We’re also super fascinated by what’s happening at the Serpentine museum and the GANism movement,” they added. For those out of the loop, GAN stands for generative adversarial networks – or put elsewise, art created by artificial intelligence (AI).

Despite WKDPTNR’s unorthodox style, the agency has managed to capture brands’ interest – and ease them into experimenting with new technologies. Collaborating on creating such surreal experiences requires flexibility on both sides, though.

“We have a flexible aesthetic and can work under most creative guidelines,” Fontaine and Lillemon explain. “Typically, clients approach us precisely because of our hyper-real fashion-forward aesthetic. Sometimes clients don’t actually know what they want, and this means we have to open their minds and show them the possibilities.”

All of this effort, Fontaine and Lillemon claim, is in the name of pushing the envelope of technology and creative advertising.

“We truly believe these technologies are part of a ubiquitous future where our screen-based existence will soon be out of date,” the creatives tell me. “We’ll be less tethered to our devices and able to experience AR and VR hands-free. Pairing this tech with art and creative ideas opens up infinite possibilities, so it’s not a matter of relying on them, but preparing for a future that kind of lives in a holodeck.”

“The challenges are that adoption sometimes takes a little longer, as people need to get used to new ways of interacting with this technology and the world around them.”

Want to learn more about the future of creative advertising? We’ve got you covered. WKDPTNR’s Fontaine and Lillemon will be attending TNW Conference 2019, where they’ll discuss how AR and VR can make advertising a lot more impactful. Find out more here.