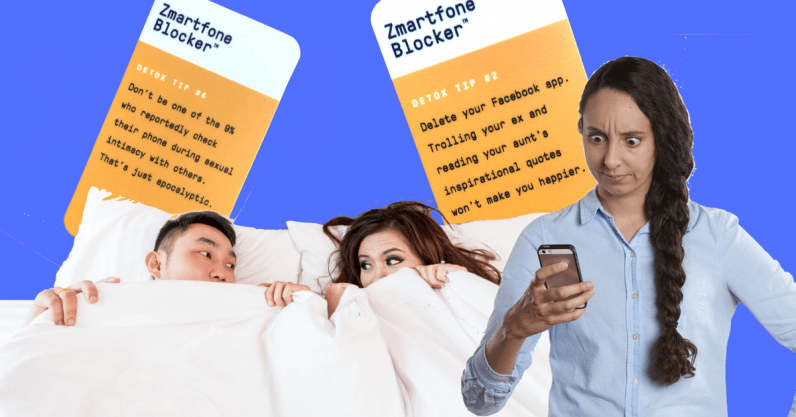 This can be annoying. Some would even go as far as to call this addiction.

Many people wish they could use their phones less, but can’t figure out how. I’m one of them myself. I’ve Googled: “how to use your smartphone less.” I’ve tried the Moment app, which tracks my usage and feeds me the harsh truth. Something I had not tried, however, was an analog solution.

That’s where the Zmartfone Blocker comes in. Zmartfone Blocker is a patch that sticks on the screen of your phone, blocking you from seeing it. It was designed and developed by the Danish design studio Stupid Studios, because they, like most other slaves of technology, know about being addicted to their smartphones.

Many apps out there, like Moment, Offtime, and Breakfree, are designed to help people use their phones less, either by tracking usage or blocking apps. The people at Stupid Studios thought there was something contradictory about beating your tech addiction with more tech. So, as it does with other addictions, could a patch help?

The concept is ridiculously simple. As you try to work and fight the automatic urge to pick up your phone every 15 minutes, the patch on the screen will confront you, forcing you to reconsider. One pack comes with ten patches, each with its own individual encouraging message or statistical fact.

One patch says “Don’t be one of the 9% who reportedly check their phone during sexual intimacy with others. That’s just apocalyptic.” There’s also “Don’t text and walk. People don’t appreciate pinballing off you and it’s likely to give you poor posture. Correct your iHunch while you still can!” My favorite:

So… does it work? Yes, to a certain extent, at least. The bright yellow patch immediately reminds you of your goal, even before you pick up your phone. It keeps you mindful at all times, which does help a lot.

However, the patch isn’t big enough to cover the entire screen, so if I get a push notification I still see it, but I don’t see exactly what it says. In my case, this has a counterintuitive effect because my curiosity to see WHAT JUST HAPPENED ON INSTAGRAM will always get the better of me.

In some situations, I genuinely believe it can be useful. Especially since the patch is a physical thing, merely touching it will work as a reminder that you don’t actually need to. Which is quite nifty, I’d say

So, if you’ve passed the first step of admitting your smartphone addiction and you’re ready to take action, Zmartfone blocker is worth considering. In the meantime, take inspiration from the rapper-turned-dubious-Twitter-guru, Kanye West, on how to change your perception about your smartphone:

Look at your phone as tool not an obligation. Would you walk around with a hammer in your pocket? You would pick up a hammer when you needed it you would never be addicted or obligated to it. Use your phone like a hammer only pick it up when you need it.

He actually has a point.