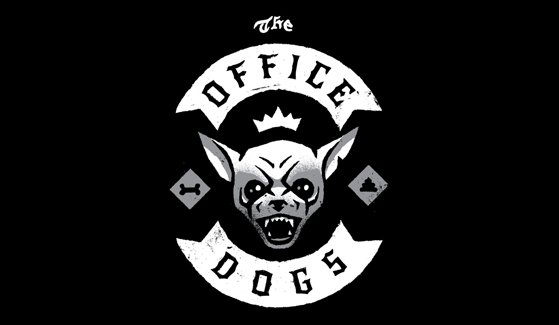 It started out as just a burst of free expression — an experimental urge to explore our “shared design/language experiences,” according to graphic designer Matt Stevens.

But then, this set of biker-inspired logos eventually morphed into a series of designer-insider “gang signs” which are inherently highly conceptual, and eventually into a Kickstarter project.

The goal of the Kickstarter project is to raise enough money to produce a series of nine of these designs as t-shirts, place all 20 on a screen-printed poster and produce some temporary tattoos and patches.

“There is a unique subculture that exists amongst those of us that have paid our dues and the Design Gangs Series humorously captures that through a series biker-gang style badges on a variety of printed goods,” Stevens wrote on his Kickstarter page.

The prints are screened via a two-color printing process on French Black Muscletone stock and will be produced at 18 x 24 inches to fit a standard frame. The shirts are printed at the Cotton Bureau in two colors on black. The shirts are 100 percent fine cotton jersey American Apparel t-shirt stock and are available in standard sizes.

The project is due to end in early December, and has yet to reach half its goal. So there’s still time left to get in on the fun.

Read next: Before 'Birdman': The 5 best jazz scores in movie history