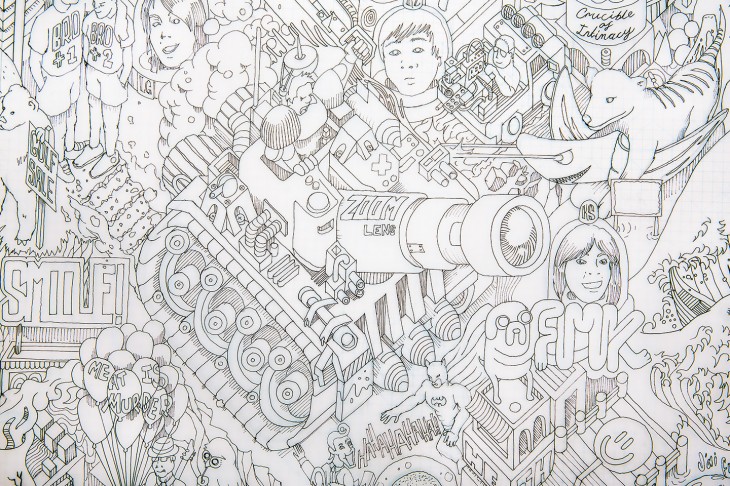 Internetopia, a massive, crowdsourced Web drawing by artist Benjamin Redford, started out as an experiment to envision what physical streets and avenues of cyberspace might look like. It ended up as something way more complicated: an interior snapshot of its participants’ collective imagination.

Some 220 people heeded Redford’s Kickstarter call to share their thoughts by reserving a cube of space on a communal drawing and telling the artist what they wanted him to draw. Each cube cost $1. People could reserve as many cubes as they wanted. No drawing request was rejected.

Internetopia reached its $2,000 goal in under 24 hours — as the tally rose an astonishing $11,347. Redford reckons this drawing is likely the largest piece of crowdsourced art done by a single artist ever. Released today after three months of what Redford calls “nonstop drawing,” the artwork measures 24 x 36 inches. The picture was done entirely in 0.1mm technical pens and pencils.

The idea arose from the concept of spatial curiosity. “I read a lot of sci-fi and got increasingly interested by the idea of cyberspace. The project was based on the idea of what it might look like if it were an actual town or city rather than the neon digits and infinite grids of stereotypical depictions of cyberspace,” Redford said. But when the requests started pouring in, he changed his mind.

“This felt restrictive and more about the internet rather than the people behind the screens. I opted for an ‘ask for anything to be drawn’ approach because this seemed more neutral and a better way to interpret the collective consciousness of the people who saw that project on the internet at that time.” Thus, the participants rather than the artist determined, in the end, what the drawing would look like and what it would include.

“I was trying to map out a space or terrain, so it felt right to draw in an architectural, isographic style,” Redford said.  “The hand drawn-ness of it just came from a desire to work on something off the screen and to have an original artwork at the end, rather than just a digital file.”

The poster is plate printed in two colors, signed and numbered and will be shipped free of charge to anywhere on the planet. Redford says there are now about 100 copies of the signed, numbered limited edition prints left of the original crop of 300 A1-sized posters. They cost $50 each.

Fun facts:
• The largest number of cubes purchased by a single contributor was 125.
• A total of seven Waldo’s/Wally’s were requested, all from different people.
• A very high percentage of requests involved animals.
• Two penises — and one naked man — were requested (all by men).
• Somewhere, there is chihuahua dry humping a Moomin.
• No one asked for blank space.

➤ Internetopia (to see the entire drawing)

Read next: HTC's decline continues after the launch of the flagship One (M8), with revenue down 27% YoY